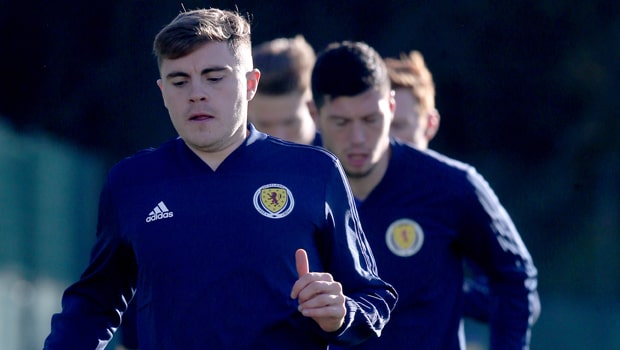 Scott Sinclair feels Celtic team-mate James Forrest is a must-use weapon for Scotland in their upcoming UEFA Nations League double header given his fine form this season in the Hoops.

Alex McLeish takes his side to Albania on Saturday before entertaining Israel at Hampden Park early next week. The Tartan Army know that winning their Nations League group rests on positive results from both games.

There were plenty of raised eyebrows last month when Forrest, fresh from scoring four goals against St Johnstone in a Scottish Premiership thumping at McDiarmid Park, was not handed a starting jersey by McLeish as Scotland stumbled to a defeat in Israel.

Sinclair feels the Parkhead winger is capable of being Scotland’s go-to man this week, if selected.

“He’s brilliant,” enthused the Englishman. “He’s so quick with his feet and, when he beats that first man, they’re not catching him.

“He’s so quick he can just drive past him and get a good cross in. He was brilliant against Leipzig and he’s heading to Scotland in good form.

“Even at international level, he takes some stopping. To be honest, I don’t think there are many defences anywhere that can stop him when he’s at full pelt.

“When he’s on that ball and dribbles, it’s great to watch.”

Sinclair meanwhile is content that his own form is picking up again for Celtic. In particular, the blossoming relationship with himself, Kiernan Tierney and Ryan Christie – one that led to Odsonne Edouard’s winning against Leipzig in the Europa League – is giving the winger good vibes.

“The relationship we’ve built up, myself and Ryan, with KT in there as well, it’s really beginning to work very well,” he added.

“He’s [Christie] a clever player and has fit in with the combinations we’re putting together. It feels very good.”