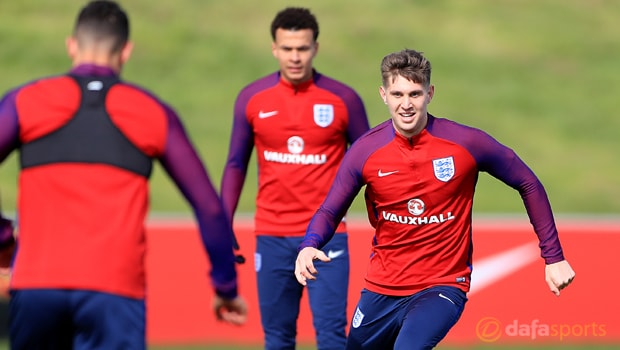 John Stones is hoping England can get a positive result against Germany on Wednesday and take that winning feeling into the 2018 World Cup qualifier at home to Lithuania four days later.

England head to Germany for the second time in just under a year and the Three Lions will be aiming to record back-to-back victories over their opponents for the first time since 1966.

In March 2016, then-manager Roy Hodgson guided the English to a 3-2 victory over the world champions with goals from Jamie Vardy, Harry Kane and Eric Dier completing a brilliant comeback win, having been 2-0 down.

Since that triumph, England were embarrassingly knocked out of Euro 2016 by minnows Iceland – forcing the resignation of Hodgson – and his successor Sam Allardyce only lasted one game before being sacked following an investigation.

Gareth Southgate was placed in temporary charge of the national team before being handed the job on a permanent basis, and Wednesday’s friendly will be his first match as full-time boss.

The bigger game in terms of major tournament implications is the clash against Lithuania on Sunday and England, who are 19.00 to win the World Cup in Russia, will be hoping to extend their lead at the top of Group F.

However, Stones, who has endured a topsy-turvy season at Manchester City, is only focusing on Germany right now and wants his side to build some momentum from the encounter in Dortmund.

He told Sky Sports News HQ: “A big game in Germany that is watched by everyone, a lot at stake and one we will relish and hopefully get a good result there and take it in to the next one at Wembley.”

Germany are the firm 1.73 favourites to win the friendly, a draw is priced at 3.75 whilst the visitors are 5.00 outsiders to give Southgate his first as permanent boss.