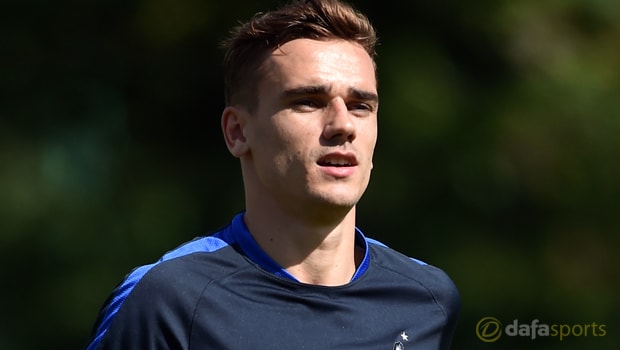 Antoine Griezmann insists he is happy at Atletico Madrid for the time being and has no intention of leaving the club in the summer transfer window.

Griezmann joined Atletico in 2014 from Real Sociedad for a fee believed to be around 30million euros and he has become one of the leading stars in world football ever since.

The France international, who was top scorer with six strikes and voted best player at Euro 2016, has scored 58 goals from 102 La Liga appearances since arriving at the Vicente Calderon.

His impressive performances this season have helped Los Rojiblancos progress to the quarter-final stage of the Champions League where they will now face Premier League champions Leicester City.

Diego Simeone’s men are 1.29 favourites to win the first-leg on home soil, a draw is priced at 5.00 whilst the Foxes are an 11.00 to come away with the victory.

Several reports have linked Griezmann with a move away from Atletico in the summer and 20-time English champions Manchester United are said to be very keen on a deal.

Real Madrid and Barcelona are also thought to be keeping a close eye on the situation but the 25-year-old has reassured fans he won’t be leaving anytime soon.

“Right now I don’t see myself at Barcelona or Real, or anywhere else,” Griezmann told L’Equipe

“I have no intention of leaving Atletico Madrid, for Paris Saint-Germain, China, the USA, Russia, or elsewhere.”

Atletico are back in La Liga action on April 1 when they travel to Malaga and the visitors are firm 1.67 favourites to clinch all three points, a draw is priced at 3.60 while the hosts are 5.25 outsiders.