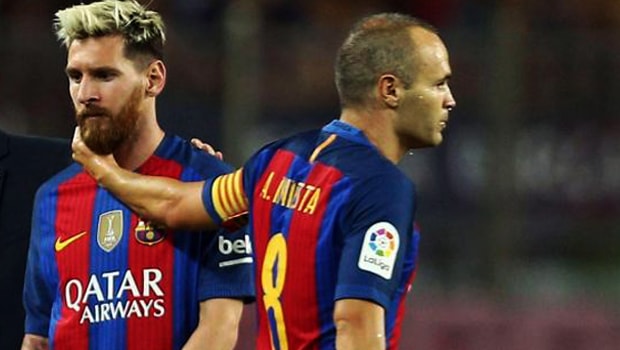 Messi, who signed an extension in 2014, is out of contract in 2018 while Iniesta’s current contract also expires at the end of the next campaign.

Both players are legendary figures at the club, having come through the youth set-up, and together they have helped Barcelona to countless pieces of silverware.

The Catalans know just how important the pair are and Spanish outfit are working tirelessly to agree extensions at the Camp Nou for both first team members.

Messi has scored 41 goals across all competitions this season, helping his side to second in La Liga and also to the quarter-final stage of the Champions League, whilst Iniesta has again pulled the strings from midfield.

Some reports have claimed the duo could leave in 2018 but Fernandez is confident both players will be pulling on the famous shirt for several more years.

“[Messi] will renew, as I’ve always said,” he told Cadena Ser. “He is happy in Barcelona, he feels comfortable in the team and the environment is perfect.

“I don’t have any doubt [that he’ll sign a new deal]. Looking into his eyes I see that he is happy at Barcelona.

I don’t want to speak too much, though, as I know that there are many repercussions with this topic.

“[Iniesta] will also renew and he’ll do it in his own time. I have no doubt that he’ll renew and neither does he.”

Barcelona return to league action on April 2 when they travel to Granada and the visitors are 1.20 favourites to win, a draw is priced at 6.50 while the hosts are massive 13.00 outsiders.