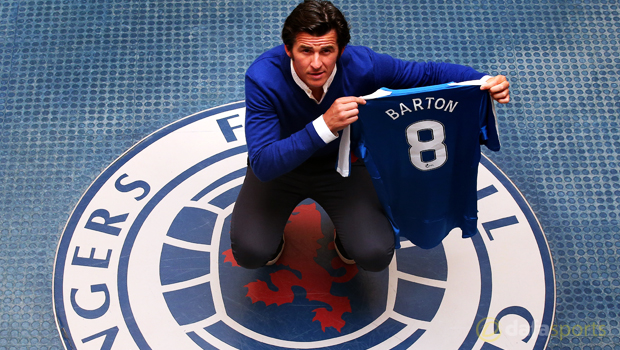 Joey Barton has admitted the opportunity to join the Ibrox club on a two-year deal was one that got his ‘blood pumping’.

Barton rejected a new one-year deal with Burnley after he helped the Clarets secure promotion to the Premier League by winning the Championship.

The combative midfielder revealed that winning that second-tier title had convinced him to aim for more silverware during the twilight of his career.

The 33-year-old feels Rangers will give him that opportunity as they get set for life back in Scotland’s top flight.

Mark Warburton’s team – like Burnley – were champions of the second tier last season and Barton says the appeal of the Glasgow side was one he was not willing to turn down at this stage in his career, having already sampled life in the Premier League on multiple occasions.

“When I first found out there was an opportunity to come here, that got the blood pumping,” Barton told the Rangers website.

“I’m fully aware of the situation the club has been in for the last few years but to be part of a group that is going to put this club back where it belongs was an opportunity, that if I didn’t take, I would probably have regretted it for the rest of my life.”

Barton travelled to Ibrox last week and the once-capped England international says he quickly made up his mind it was the right move for him. “It was very simple.

I came up, had a look around and was instantly impressed – both with what is happening at the club just now but also the history and tradition of the place,” he added.

“I went away with Rangers at the forefront of my mind, and I just knew I had to go and do it, and it was something I had to be a part of.”