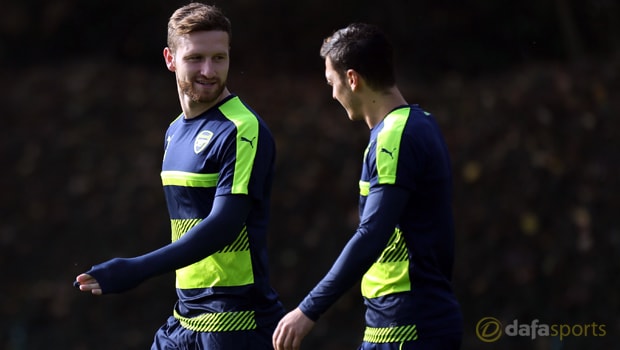 The Gunners were embarrassed 10-2 on aggregate by Bayern Munich to again crash out of the Champions League in the last 16.

They have also suffered in the Premier League, with defeats at Liverpool and West Brom seeing them slip to sixth, leaving them 3.75 for a top four finish.

Questions continue to be raised about whether boss Arsene Wenger will be in charge beyond the summer and a number of players seem to be gauging his situation before making decisions on their own futures.

Ozil has come in for plenty of criticism, with his lacklustre performances attracting plenty of ire from the fans due to his lack of goals and assists.

Mustafi only arrived in the summer, signing from Valencia for £35m but despite a decent start, has struggled to provide the grit he was expected to add to the back-line.

The pair’s fellow German Lehmann was part of the famous ‘Invincibles’ side who went unbeaten during the 2003-04 campaign and has kept an eye on his former club’s fortunes.

When asked about the contribution of his compatriots, the 47-year-old did not hold back in his assessment, admitting that they could be hindering the team.

He told The Sun: “You must be a big player mentally. There’s always a question with Ozil, how much can he contribute when it gets tough?

“It’s not Mustafi’s fault someone has paid £35m for him. If someone buys me for £35m, the next day I’m not a better player.

“He is giving everything. But sometimes the team concede five, so he has to ask himself if it’s good enough?”

Next up after the international break is the visit of Manchester City on April 2, a game the Gunners are 3.00 to win, with the draw 3.40 and the Citizens priced at 2.25.