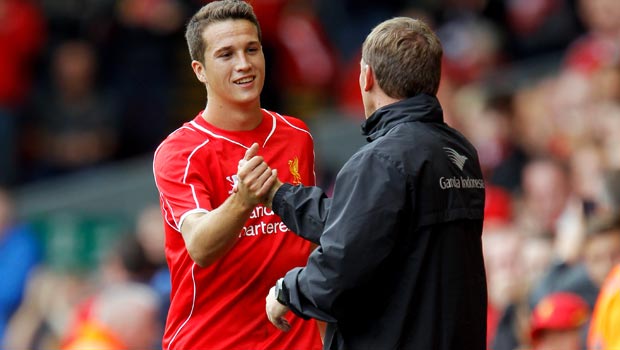 Javier Manquillo says he has settled into life well on loan at Liverpool and is enjoying working with captain Steven Gerrard and manager Brendan Rodgers.

The right-back joined the Reds on a two-season loan from Atletico Madrid last month and has made a good early impression, starting two of the club’s first three Premier League games.

With Glen Johnson currently out injured, the Spaniard is expected to keep his place in defence for the visit of unbeaten Aston Villa on Saturday and he admits he is enjoying his experience on Merseyside so far.

Liverpool beat Southampton 2-1 on the opening weekend of the season before a disappointing 3-1 defeat at Manchester City. But a 3-0 victory at Spurs before the international break means they entertain Villa this weekend in confident mood.

Manquillo, 20, says playing in the same team as Gerrard is “a dream come true” while he has also been impressed by boss Rodgers.

“The first time I watched Gerrard play, I was only a child,” he told Liverpool’s website. “Now I play in the same team with him, he’s a truly great player and it’s a dream come true to share the field with him.

“I’m very happy to stay here. I get on very well with the manager here. He helps us with everything he can, which is great. He also speaks Spanish fluently too, so it’s really easy for us to communicate.

“I have some fellow Spanish team-mates with me over here too – Alberto Moreno, Suso and Jose Enrique are all here and there are some others in the squad who speak Spanish too. It’s been really easy for me to adapt.”

Liverpool begin their first Champions League campaign in five seasons next week when minnows Ludogorets visit Anfield and Manquillo will hope to play his part in the European campaign.

Rodgers’ side are 1.19 to see off Ludogorets on Tuesday, the draw is priced at 6.40 and the Bulgarian outfit are available at 13.62.