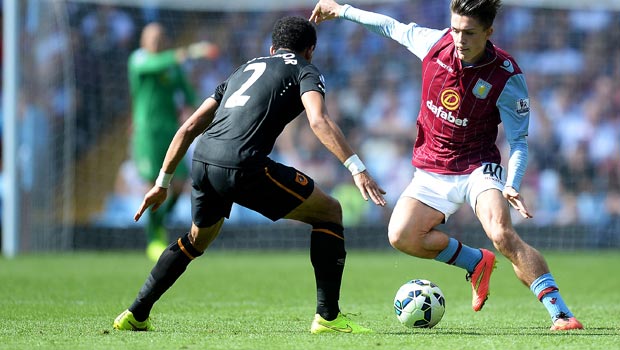 Aston Villa starlet Jack Grealish is set to be offered a new four-year deal as the club look to persuade him to stay amid interest from elsewhere in the Premier League.

Grealish is tipped for big things and the youngster, who is celebrating his 19th birthday on Wednesday, has been involved in Paul Lambert’s first-team squad so far this season, coming on against Stoke and Hull.

He has now entered the final 12 months of his current deal but Villa are desperate to keep him long-term, with plenty of their top-flight rivals interested.

Chelsea have had scouts checking his progress over the past six months and reports on Tuesday suggested the west Londoners are hoping to lure him south in January.

However, Villa are being tipped to offer the teenager new terms imminently to persuade him to stay. Grealish has been at the club since he was six years old and graduated through the Bodymoor Heath academy before impressing out on loan at League One side Notts County last season.

He already has five Republic of Ireland Under-21 caps to his name and played in the 2-0 defeat to Germany in Halle last week.

Meanwhile, Villa are also hoping to sort out a new deal for midfielder Fabian Delph after his recent impressive form.

The former Leeds man appears over the injuries that had disrupted his progress at the club and he earned a call-up to the England squad for the games against Norway last week and Monday’s Euro 2016 qualifier in Switzerland.

Delph is also in the final year of his contract but talks are planned for this month and boss Lambert is said to be confident that the 23-year-old will put pen to paper on a new long-term deal soon.

Villa have won two and drawn one of their opening three league games this season but face a tough test to stay unbeaten on Saturday evening when they go to Liverpool.