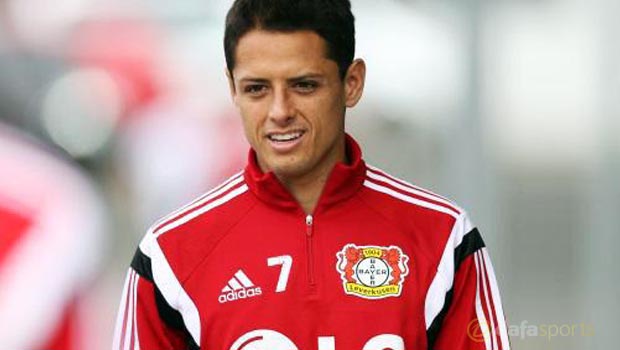 Javier Hernandez says he is looking forward to playing in the Bundesliga after completing his move to Bayer Leverkusen from Manchester United for a reported £8million.

The Mexico international arrived at Old Trafford back in 2010 and was a regular fixture in the first-team in the first four seasons, making 101 Premier League appearances and scoring 37 goals in the process.

However, the arrival of Louis van Gaal last summer sent the striker down the pecking order and he was shipped out on loan to Real Madrid for the previous campaign, where he had to settle for a role from the bench after playing second fiddle to Karim Benzema.

The Spanish giants opted against a permanent move and the 27-year-old was sent back to United, where he was hopeful of reignited his Old Trafford career. A place in the first-team did look likely, especially after Van Gaal allowed Robin van Persie and Radamel Falcao to leave but the Dutchman has instead sold the Mexican to Leverkusen.

Hernandez has put pen-to-paper on a three-year contract and is hoping to achieve great success after finally feeling ‘wanted’ by a club again.

“I have played in two of the three major leagues in Europe – the Premier League and the Primera Division in Spain,” he said.

“Now I want to experience the Bundesliga. I have heard a lot about the great stadiums in Germany, where the fans are unique.

“It’s wonderful to get the chance to play for a club like Leverkusen, who I know from the Champions League. This is a great opportunity and I want to achieve great things here.”

Leverkusen are currently sixth in the Bundesliga, having recorded two victories and lost one from their opening three matches of the season and the arrival of Hernandez should give the squad a huge boost.

Bayer return to league action on September 12 when they host Darmstadt and the home side are 1.25 favourites, a draw is 5.50 while the visitors are big outsiders at 11.00.