Posted by Fred McKinley on September 1, 2015 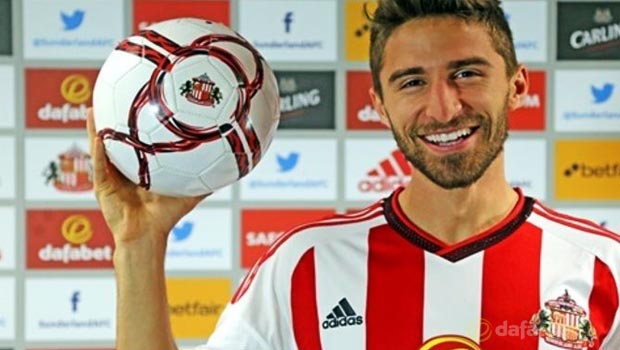 Sunderland’s new arrival Fabio Borini is looking forward to making his second debut for the Black Cats after the conclusion of the international break.

The one-cap Italy international spent the 2013/14 campaign on loan at the Stadium of Light and was a regular fixture in the first-team, making 32 appearances and scoring seven goals.

Some of his most notable strikes came against fierce rivals Newcastle United, defending Premier League champions Chelsea and at Wembley during the Capital One Cup final against Manchester City.

Sunderland were keen on making the move permanent at end of the loan but the striker opted to stay at Anfield and fight for his place in the Liverpool team, a decision that ultimately backfired as he made just five starts for the Reds last season.

The Black Cats have now finally landed their target before the close of the transfer window, shelling out £8million to sign the former Parma star on a long-term deal.

Borini is desperate to pull the famous red and white shirt on again and the Italian is confident of enjoying a successful time at the club.

“I am delighted to be back at Sunderland. It is a club I know really well from my time here previously,” he said. “It will be emotional for me to play at the Stadium of Light again and I can’t wait to get back on the pitch as a Sunderland player.”

Sunderland, who are bottom of the Premier League, play host to Tottenham Hotspur on September 13 and they are outsiders at 3.80 to take all three points, a draw is 3.40 while the visitors are favourites at 1.95.

Dick Advocaat’s men are still searching for their first win of the season, having drawn two and lost two matches so far this term.