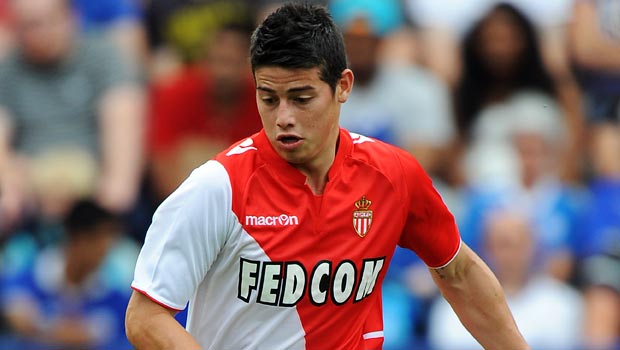 New Real Madrid signing James Rodriguez says he hopes to win “many titles” with the club after completing his move from Monaco.

Rodriguez made the switch from France to Spain earlier this week for a huge 80million euros.

The attacker, who made a name for himself while playing for Colombia at the World Cup this summer, has picked up league winner’s medals in Argentina and Portugal while playing for Banfield and Porto and is now hoping to add to his collection in Madrid.

Speaking to Real Madrid TV, he said: “I always wanted this and I hope to be happy here for many years. I like challenges and to win, and I’m at a great club to achieve many titles.”

Rodriguez will line up as part of a mouth-watering attack including himself, Cristiano Ronaldo and Gareth Bale, all signed for a combined total of £229million.

And the midfielder, after topping the Ligue 1 assist charts in 2013-14, believes he can add even more to Carlo Ancelotti’s team.

“Goals, passes and play. I am only one [person] but I want to help,” he added. “I’m anxious. I want August 1 to come to start training and be better every day.”

Real Madrid boss Ancelotti sees Rodriguez as a star of the future in the Spanish capital, with the player facing competition for the number 10 role from Isco and possibly fellow new arrival Toni Kroos, who can also play in a deeper position.

When asked if Real actually needed to sign Rodriguez, Ancelotti told reporters: “Madrid’s history will tell you that they always want to have the best players and ones with a future.

“We have signed one of the World Cup’s stars. You need these kinds of players for the future, not just for the present, too.”

Real Madrid are 1.85 favourites to win La Liga next season and are 5.00 to retain the Champions League.