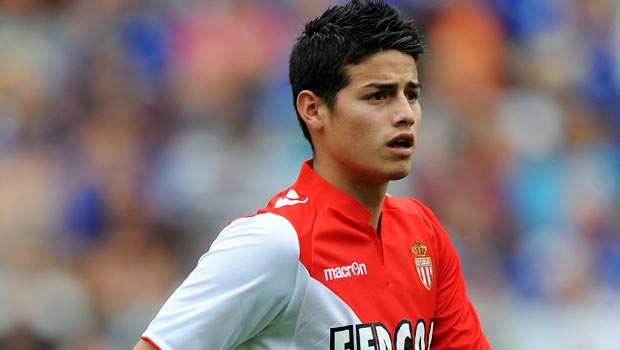 James Rodriguez says he wants to go down in Real Madrid history after completing his reported £63million move to the European champions.

The Colombia international was unveiled at the Bernabeu on Tuesday in front of 45,000 Real supporters who had all turned out to catch a glimpse of the man who lit up the World Cup in Brazil this summer.

The 23-year-old collected the Golden Boot at the tournament, despite Colombia going out in the quarter-finals, while his volley in the last 16 against Uruguay was voted the best goal of the World Cup.

Rodriguez is now hoping to transfer the good form he showed in Brazil to Madrid after putting pen to paper on a six-year contract.

The move sees him leave Monaco after just one season, with Rodriguez having shone in Ligue 1 where he was the leader in assists last term.

The South American has been given the number 10 shirt by Real and will look to be the playmaker behind the formidable frontline of Gareth Bale, Cristiano Ronaldo and Karim Benzema.

Rodriguez admits there is plenty of pressure on him to perform next season but is confident he can maintain the club’s tradition of winning trophies.

“I’ve always followed Real Madrid and always dreamed of playing here. I’ve suffered a lot to get here and when you do that then it tastes so much better,” he said.

“I will never forget this day. I hope to work hard, to train well, and to experience a lot of joy here. I know I am under a lot of pressure, but I am happy to face it.”

When asked about being the fourth most expensive player in history, Rodriguez replied: “The numbers mean nothing to me. I just want to help make history and bring joy to the Madrid fans.

“This is a club which is used to winning and I’m prepared mentally and physically to do so. It is a pleasure to be among so many stars and I’m sure I’ll learn a lot from everyone.”

Real will hope that with Rodriguez and German midfielder Toni Kroos on board they can become the first team to successfully defend the Champions League.

Los Blancos are 5.00 to win an 11th European title next season, with Bayern Munich also 5.00 and Spanish rivals Barcelona 6.50.