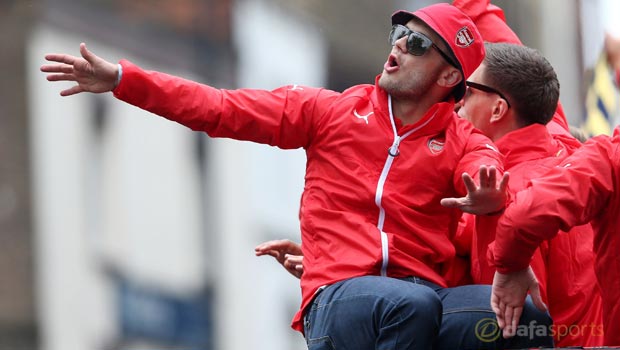 Jack Wilshere has dismissed speculation suggesting a move to Manchester City could be on the cards with the midfielder insisting he is “happy” at Arsenal.

The England international has been linked with a switch to the Etihad Stadium over the past months as the Citizens look to boost their home-grown quota for the next season.

City lost their Premier League crown to Chelsea this year and manager Manuel Pellegrini, whose future at the club is rumoured to be uncertain, is aiming to add some notable additions to the squad.

Having lost James Milner, the blue side of Manchester need to bring in some English players and Wilshere, who has struggled with injuries, is said to be top of the list.

The Arsenal midfielder only featured 14 times in the Premier League last season, scoring two goals in the process, but the 23-year-old is still regarded as one of the best players in England.

But Wilshere has provided the Gunners with a boost after admitting a move to City is not something he has thought about as he is happy to stay at the Emirates.

Arsenal, who finished third in the Premier League last term, are priced at 5.50 alongside Manchester United to win the title next season.

Chelsea are the favourites once again at 2.38 while City are 3.75 to reclaim their crown.