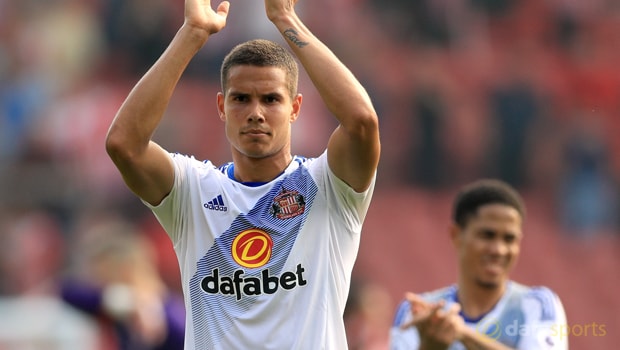 Jack Rodwell says there is a long way to go this season and insists Sunderland have plenty of time to avoid relegation once again.

The Wearsiders have produced two remarkable escapes over the past two campaigns, having finished 16th and 17th, and they are in need of another Houdini act this term.

The Black Cats, who appointed former Manchester United manager David Moyes in the summer, have struggled in the first half of the season and are currently sitting 18th in the table.

Just four Premier League victories have been recorded – against Watford, Leicester, Hull and Bournemouth – and the team are a point adrift of Crystal Palace in 17th.

The north-east outfit did earn a battling point last time out against Liverpool in which talisman Jermain Defoe grabbed a brace, taking his goal tally to 11.

Rodwell also produced a good performance in the draw with the Reds and the midfielder, who has been plagued with injuries since arriving at the Stadium of Light from Manchester City in 2014, believes relegation can be avoided.

“There are still a lot of games to go, there is still only three or four points between us and 15th or whatever.

You put a few wins together and you are almost safe,” he said. “We are obviously in a fight until the end, we are in a fight, but we have to keep going and showing what we are doing.”

Sunderland will switch their attention to the FA Cup on Saturday when they host Premier League rivals Burnley, who are eight points clear of the drop zone.

The home side are 2.20 favourites to advance into the next stage of the competition, the draw is priced at 3.30 while the visitors are a 3.20 chance.