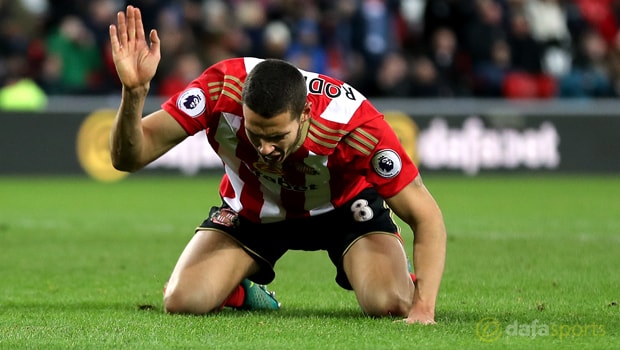 Sunderland have confirmed Jack Rodwell will require a short spell on the sidelines after suffering a medial ligament injury against Stoke on Saturday.

The former Everton and Manchester City midfielder missed Tuesday’s FA Cup third-round replay defeat to Burnley at Turf Moor as a result of the issue.

Rodwell played for the full 90 minutes of Saturday’s 3-1 Premier League loss to Stoke at the Stadium of Light but David Moyes has confirmed news of an injury.

The 25-year-old had recently received praise from Moyes following his positive return to action in the latter stages of 2016.

Moyes is hopeful the midfielder won’t be sidelined for a long period of time as the Black Cats look to climb out of the relegation zone in the second half of the campaign.

“Jack had a medial ligament injury,” said Moyes. “He was scanned on Monday after getting it in the game on Saturday and the scan has not come up with anything.

“I’m hoping that it shouldn’t keep Jack out too long; he’s just beginning to get a couple of games under his belt so to have him out [against Burnley] was a blow.

“They thought that he’d opened his medial ligament so the scan has not shown a great deal. “We’re hopeful that he might just have to stay off it for a week or so and let’s see how he is.”

The Sunderland manager did provide fans with some positive news over two more of his former Everton recruits as Steven Pienaar and Victor Anichebe returned to training.

He added: “Victor’s doing some running and there’s a chance he can join back in training this week, but he’s not joined the team in training to this point.

“Steven is the same, doing a little bit of running as well, and hopefully he’ll have a chance to join in training before the end of the week.”

Sunderland can be backed at 5.00 to pick up a valuable victory over West Brom, who are priced at 1.70 to win, on Saturday at the Hawthorns, while the draw is available at 3.60.