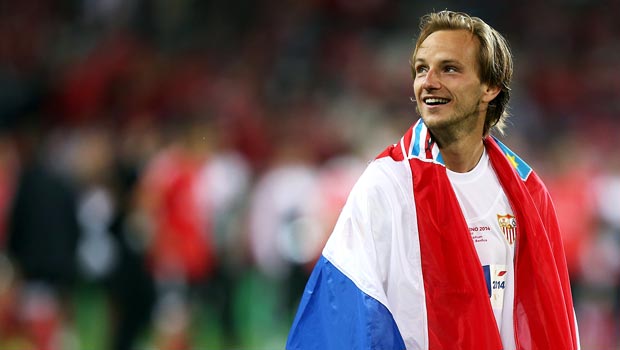 Sevilla playmaker Ivan Rakitic has described his impending transfer to Barcelona as “a dream come true”.

Having seen an initial bid turned down by Sevilla for Rakitic, Barcelona matched their £16million valuation of the Croatia midfielder earlier this week and are close to wrapping up a deal for the player.

Rakitic is expected to complete the switch when he returns from World Cup duty and is unable to hide his excitement.

When asked about the move by Catalan paper Sport, he replied: “I am very happy. It is a dream come true.”

The 26-year-old midfielder had a wonderful season as Sevilla captain in 2013-14, scoring 12 goals and making 10 assists in 34 La Liga appearances.

He also made 14 appearances for Los Rojiblancos in their Europa League-winning campaign and lifted the trophy after their penalty shootout victory against Benfica.

Rakitic will be a part of the Croatia team that takes on Brazil in the opening match of the 2014 World Cup on Thursday.

He will have to be at his best to help his team avoid defeat, however, with Brazil the longstanding favourites at 1.30 to win the match. Croatia meanwhile are priced at 9.93.

Rakitic will become the first big signing at Barcelona in the Luis Enrique era, after the former Celta Vigo coach took charge from Tata Martino at the end of last season.

His transfer to the Catalan giants puts the future of Cesc Fabregas at Camp Nou in jeopardy.

The Spain midfielder has reportedly been told he can leave the club this summer and is interested in a return to the Premier League, with Chelsea favourite to land the former Arsenal starlet.