Posted by OLADIPUPO MOJEED on September 9, 2021 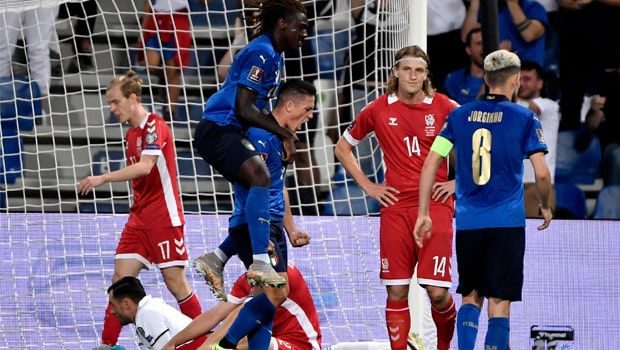 Italy has extended its unbeaten games to 37 after thrashing Lithuania 5-0 in the World Cup qualifiers.

This is a new all-time world record, as Moise Kean scored a double on his return while Giacomo Raspadori scored one and created another before Giovanni Di Lorenzo’s wayward cross.

Italy had recorded back-to-back draws before running riot over their visitor. This made the game an important one for Roberto Mancini’s men, who need the boost. Itlay had no choice but to win against the minnows of the group who had lost all eight games in 2021.

They even won in style despite being without Ciro Immobile, Lorenzo Insigne, Marco Verratti, Lorenzo Pellegrini, Federico Chiesa, Stefano Sensi and Nicolò Zaniolo. This gave Giacomo Raspadori the opportunity to make his first start for the Azzurri in Sassuolo’s home stadium.

Italy needed just 11 minutes to break the deadlock. Arvydas Novikovas succumbed to pressure, giving Moise Kean the chance to pounce and drill between the goalkeeper and the near post.

A few minutes later, hometown boy Giacomo Raspadori scored with a curler from the edge of the box. The ball seemed to be going wide until it took a big deflection off Edgaras Utkus to wrong-foot the goalkeeper completely. This made it to be awarded as an own goal.

Raspadori will not be denied later as he got his goal soon after. Lasickas tried to stop another free movement from Italy by intercepting a Giovanni Di Lorenzo roll across to Kean at the back post, but the Sassuolo striker shot the ball into the roof of the net from six yards for Italy’s third.

Italy will later make it four after an own goal and two Lithuanian assists.  The move started when Juventus forward Federico Bernardeschi put a pass over the top, and Kean met it with a superb volleyed finish off the inside of the left boot from eight yards.

Raspadori thought he had finally got a brace only to be denied by the assistant referee’s flag as he was offside when he shot into the net via the rebound from a parried Davide Calabria shot.

Giovanni Di Lorenzo then put the icing on the cake with his first Italy goal. There was a sheepish celebration because the cross looped over everyone into the far top corner.

Italy now have a goal difference of +11, and top their group with 14 points. Italy also got a boost as group rivals Northern Ireland held Switzerland 0-0.