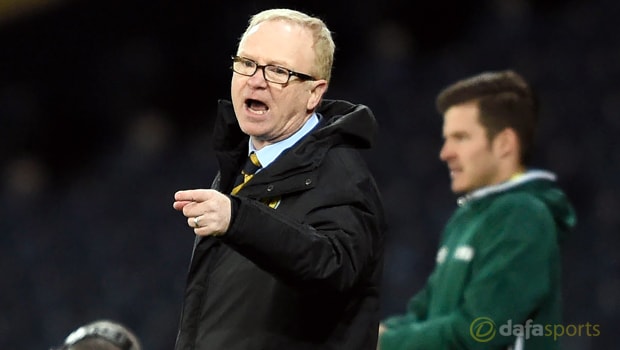 Scotland manager Alex McLeish has called for patience after his first game in charge ended in a 1-0 home defeat against Costa Rica.

McLeish is back in the Scottish dugout for a second term as manager, 11 years after his first stint came to an end.

In the run-up to the Costa Rica game, he’d called on his players to learn how to win international games.

Marco Urena’s first-half goal was enough to secure victory at Hampden Park for the World Cup-bound South American nation however, with Matt Ritchie coming closest to a leveller for a new-look Scotland team in the second period.

McLeish fielded five debutants against Costa Rica and, afterwards, he suggested there will be no overnight fix available.

“We were never really up on them the way we wanted to be, high on the back three and making the goalie kick.

“Maybe a bit of apprehension, some new caps in the team. We’ve got five guys on the pitch who haven’t played for Scotland before and that’s a plus. There’s some young kids that we’re still going to look at.

“Second half was better – much more tempo, much more urgency. Just a little bit laboured in the first half.”

Scotland face Hungary away on Tuesday in McLeish’s second game. Costa Rica meanwhile will face Serbia, Switzerland and Brazil in Group E at this summer’s World Cup in Russia.