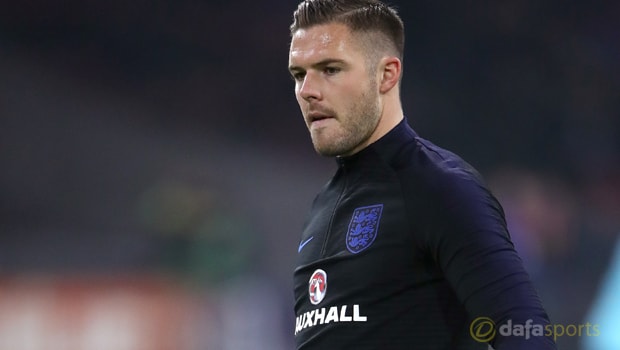 Jack Butland admits he is relishing the battle to become England’s number one goalkeeper for this summer’s World Cup in Russia.

Stoke stopper Butland is one of four goalkeepers currently in Gareth Southgate’s squad and he is expected to get the nod to start Tuesday’s friendly clash with Italy at Wembley.

Everton ace Jordan Pickford played the full 90 minutes of the Three Lions’ last match against Holland on Friday, keeping a clean sheet in the 1-0 success, while former undisputed number one Joe Hart and emerging Burnley talent Nick Pope are the other goalkeepers within the squad.

Butland admits there is a healthy competition to secure the number one spot ahead of the World Cup and he believes not knowing who will be ultimately handed the responsibility is driving all the goalkeepers on.

“It’s a good thing isn’t it, having competition? I enjoy it,” said Butland.

“The manager will make his decision when he’s ready, until that time and even beyond that time we’ll all be battling to show who is best.

“I think that’s a great way to go into a World Cup, the fact not knowing who it is just yet shows the competition is great and whoever it will be is going to be coming off a battle, which is what we want.”

Butland, who has six caps for his country to date, also confirmed that, despite the rivalry, all the goalkeepers get on really well and they are full of support for each other.

He added: “It’s a great group and we back each other – whoever it’s been in the team everyone has always supported them.”