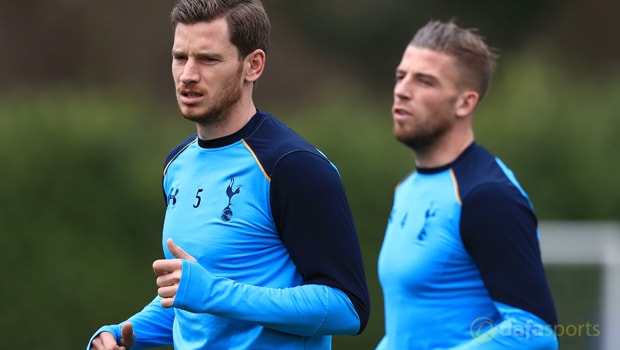 The two centre-backs know each other well, as not only have they played together with Spurs since Alderweireld’s arrival in 2015, but they also both represent the Belgium national side.

However, the duo’s club affinity could be about to end, as Alderweireld, who is yet to sign a new contract with Spurs, has been linked with a move away from the north London club.

Many may feel that Vertonghen will be concerned about his team-mate’s club future, but he is instead relaxed about the situation, although he did not want to get drawn too far into the debate.

“Whenever we play we understand each other. When I left for Tottenham, Toby left for Atletico [Madrid] and Southampton but we found each other quite quick after that, so no stress,” Vertonghen said.

“We’ve been playing together for a long time and we know how to play together, but I don’t want to speak about this because it might sound disrespectful to whoever is playing next to me or next to Toby in other situations.”

Both players are currently away on international duty, with Alderweireld, in particular, looking to get minutes under his belt, as a hamstring injury has severely limited his game time this season.

Indeed, the 29-year-old has only made 17 appearances for Spurs across all competitions this term, but he could still have a big role to play between now and the end of the campaign, as Mauricio Pochettino’s side bid to secure a top-four finish in the Premier League.

Spurs currently sit fourth in the top-flight standings, five points clear of fifth-place Chelsea and they are priced at 1.14 to finish in the top four come the end of the campaign.