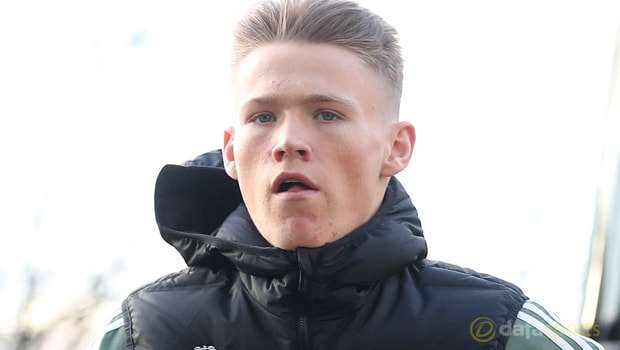 Scott McTominay is capable of making his mark on the international stage, according to former Scotland international and Manchester United coach Brian McClair.

McTominay was called up for Scotland’s friendlies against Costa Rica and Hungary by new manager Alex McLeish.

The 21-year-old has made 18 appearances for United so far this season and is also qualified to represent England at international level.

McClair, who coached the player at United’s academy, says McLeish should be praised for ensuring the player remained committed to Scotland.

“Alex McLeish made a huge effort getting to [Manchester United’s training ground] Carrington to meet up with him, because it was in the middle of the bad weather that we had. He made it, put a case, [England manager] Gareth Southgate sent him a text,” he said.

McTominay has impressed in his outings with Man United this season and McClair is eager to see him adapting to international football now.

“I’m looking forward to seeing how he deals with the national game and hopefully he’ll play in the two games that are coming up,” he added.

McTominay has been praised for his controlled midfield play this season, often doing the simple things well. Despite his tender years, he possesses in-game intelligence, says McClair, who recommended the player for Scotland’s youth teams.

“He’s an intelligent boy, he’s mature, he’s determined and we knew he was a good player, so he just needed people to have the faith in him to wait for him to develop into the athlete he is now,” McClair added.

“As far as I can remember, his gran’s got a farm in Stranraer. When I found out that, I was always pushing him [towards Scotland].”