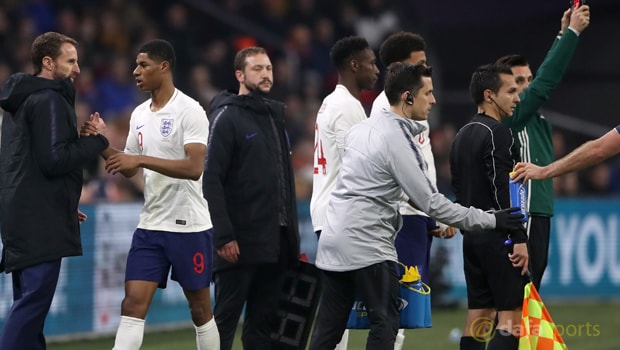 Gareth Southgate felt he had learned more about his England squad after a 1-0 victory over the Netherlands in Amsterdam.

Manchester United’s Jesse Lingard enhanced his claims of a place in the squad that will go to Russia this summer when he netted the only goal just before the hour mark in the Johan Cruyff Arena.

It was England’s first away win against the Dutch in 49 years and while Lingard was the match-winner, it was at the other end that Southgate derived the most pleasure in the performance.

Walker’s roll on the right-hand side of that trio was a surprise to many observers, but Southgate felt it had worked very well.

“In a back three, we knew the position would suit Joe Gomez after he played there in November and it is the same for Kyle. You need to comfortable defending in wide areas,” he said.

“Kyle’s use of the ball was really composed, as well as his pace being a tremendous asset. It is a position where he kind of ends up with Manchester City and of course he has a club understanding with John Stones.”

With a view to the summer and the World Cup, the Three Lions boss suggested that having versatility in his squad would be vital, while it would also see him with more wriggle room when he names his final travelling party.

“It was not a difficult decision and another reason for doing it is sometimes when you go to a World Cup you take two players for each position,” Southgate added.

“We don’t necessarily want to take six centre backs so if you have people like Kyle and Eric Dier who can fill other positions it may allow us it may allow us to take more attacking players in different positions.”