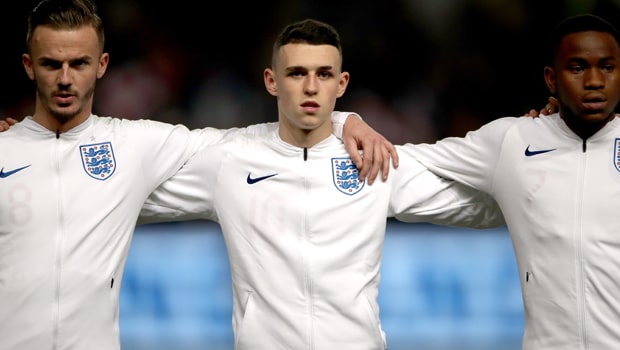 Phil Foden and James Maddison are among the star names included in Aidy Boothroyd’s England squad for this summer’s European Under-21 Championship.

There are few surprises in the squad, although Wolves midfielder Morgan Gibbs-White has earned a first call-up.

Chelsea youngsters Tammy Abraham, Mason Mount and Fikayo Tomori have also been included but they won’t link up with the squad until after the Championship play-off final – Abraham will represent Aston Villa in that game, while Mount and Tomori are on loan at Derby.

Boothroyd is pleased with the squad he has assembled and feels he has found the right balance between experience and looking towards the future.

“This is a really strong squad and I’m really pleased with the group of players I’ve got who will be representing us at the Euros,” the former Watford boss said.

“We have a real mixture in terms of age and experience.” The 48-year-old, who signed a two-year contract extension to remain in charge of the Young Lions last week, guided England to the semi-finals of the Euros two years ago.

If they are to replicate or improve on that achievement this time around, England will first have to negotiate a difficult group that also contains France, Romania and Croatia. Boothroyd certainly knows his side can take nothing for granted at the finals.

“We are coming up against three really good teams,” he added.

“France will be a real test, with their athleticism and guile, power and pace. Romania and Croatia will be different again, with their strength coming from the team as a group.”

England have not won the European Under-21 Championship since 1984, but they are priced at 5.00 to end that wait this year.