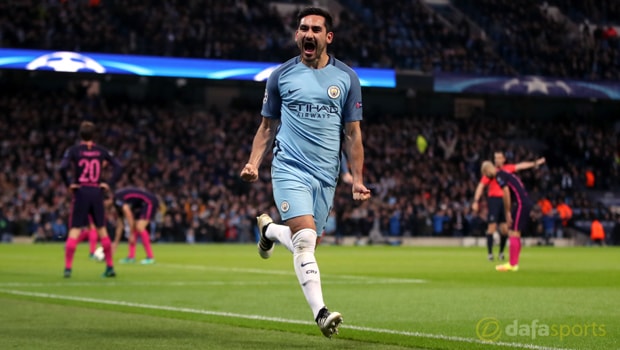 Ilkay Gundogan believes Manchester City’s recent win over Barcelona has helped them extinguish any doubts they had about the Champions League.

The Citizens, who are on offer at 11.00 to win the tournament, lost 4-0 in the Nou Camp and having tasted defeat on every other occasion they had met the Blaugrana in Europe’s top club competition, City recently gained revenge with a 3-1 win at the Etihad.

Gundogan scored twice that night and will be looking to have a similar impact when his side faces Borussia Monchengladbach on Wednesday.

With Pep Guardiola’s men still trailing Barca by two points in the standings, they will be desperate for a win in Germany in order to maintain the pressure in the battle for top spot in Group C.

Despite reaching the semi-finals of this competition last term, City have never really taken to the Champions League.

The 26-year-old, who made the final with Borussia Dortmund in 2013, believes the win over Barcelona has helped his side turn a corner, especially as they now have the confidence that they can beat the continent’s best teams.

“The win was very important for the group stage, to be second,” Gundogan is quoted as saying by the club’s official website.

“But there are two games to go. “It is also about getting used to playing these teams all the time, more than once or twice.

“Then you know what it is to play these big games – how to prepare for the games, and how to handle specific situations within the game. It’s all about having that experience, and we are getting there – there is still a way to go, but we are doing well.”