Everton goalkeeper Tim Howard out for up to six weeks 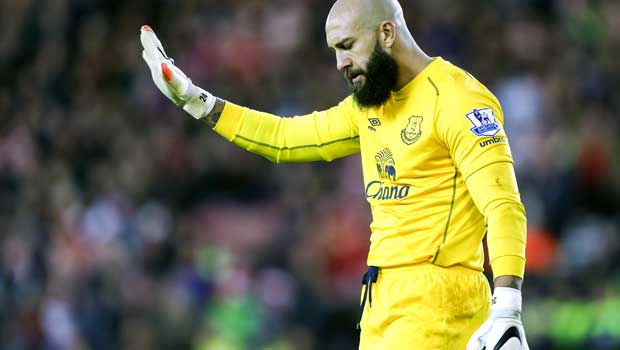 Everton goalkeeper Tim Howard faces up to six weeks on the sidelines with the calf injury he suffered during the Boxing Day defeat to Stoke.

The American stopper was forced off at half-time during the 1-0 loss at Goodison Park and missed the subsequent 3-2 defeat at Newcastle two days later.

Now the 35-year-old faces a possible six weeks out of first-team action, with Toffees boss Roberto Martinez revealing the full extent of the goalkeeper’s injury.

He said: “Tim will be out for between five and six weeks. It is an injury to his left calf. As a goalkeeper it’s really unusual to get an injury by kicking a ball.”

Joel Robles, who replaced Howard for the games against Stoke and Newcastle, is now set to continue in goal for an extended spell.

The Spaniard, who joined Everton from Atletico Madrid in 2013 following a successful loan spell at Wigan earlier that year, has only made four Premier League appearances for the Merseysiders although Martinez believes he is a capable replacement for Howard.

The 41-year-old boss has admitted that the club may now have to sign some cover in the goalkeeping department in January, with Everton’s other two goalkeepers, Russell Griffiths and Jindrich Stanek, without a first-team appearance between them for the Merseysiders.

He said: “I thought Joel was very calm against Stoke and did well against Newcastle, but we will assess whether we need cover.”

The Toffees are currently enduring a difficult Premier League campaign as they are in 12th position in the table and have lost their last three matches in a row.

Next up for Martinez and his side is a trip to struggling Hull on New Year’s Day.