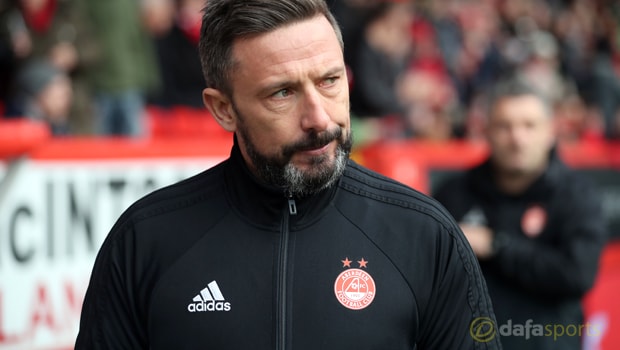 Aberdeen boss Derek McInnes says Celtic will reflect on a disappointing season if they do not win another domestic treble.

The Dons have been Celtic’s nearest pursuers in Scotland over the last three years but they were powerless to halt Brendan Rodgers’ ‘Invincibles’ last season.

The Hoops were unbeaten in a domestic campaign that saw them crush Aberdeen by 30 points in the Premiership as well as beating the Pittodrie outfit in the League Cup and Scottish Cup finals.

McInnes says it is up to the other teams in Scotland to bring the fight to Celtic and look to halt their march towards more silverware.

Last month Hearts stunned the Hoops with a 4-0 success at Tynecastle in the league, ending Celtic’s 69-game unbeaten domestic run.

Rodgers’ men have already tucked away the League Cup trophy again and they lead Aberdeen by eight points in the title race.

McInnes says Celtic’s resources mean they must be aiming for another clean sweep, with any other outcome to be labelled a failure.

“That’s the challenge for us all to stop it [treble], said McInnes.

“It is tough. They have lost their domestic unbeaten run recently and it was always going to be tough to stop that.

“Celtic are so far ahead resources wise that I think it would be seen as a disappointing campaign if they didn’t win a treble to be honest.

“They should be favourites in every domestic competition – huge favourites. And it’s up to the rest to find a way to stop that and get our own clubs winning something.”

Second placed Aberdeen are 1.91 in the betting without Celtic market in the Scottish Premiership. Rangers, three points behind the Dons, are 2.00.