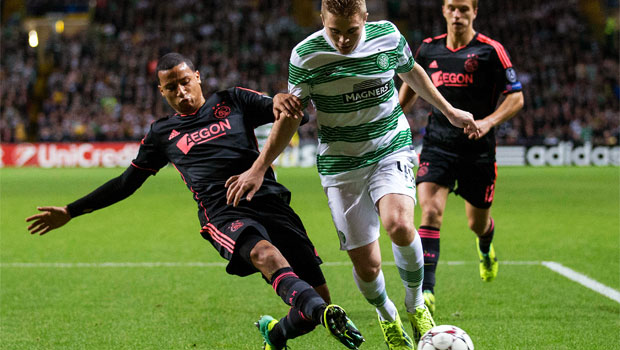 Celtic know that defeat at home to Ajax on Tuesday will all but end their Champions League involvement.

Neil Lennon’s side are bottom of Group H after defeats to AC Milan and Barcelona, but have back-to-back games with Ajax to come.

Celtic reached the knockout stage last season, and if they are to have a chance of repeating the feat, must not lose, according to Lennon.

He said: “I’m confident with this team that we can perform away from home as well, however winning this game would put us in a really good position in the group.

“Losing the game would probably end our aspirations for trying to qualify.”

Captain Scott Brown is suspended, and there was a further blow when Kris Commons was ruled out after sustaining a hamstring strain during the 1-1 draw with Hibernian at the weekend.

“We are hoping it’s not as bad as a tear but he won’t make the match,” added Lennon.

“He might make the corresponding game in Amsterdam, though.

“He’s been for a scan and we are waiting on confirmation but he’s feeling a lot better now.”

With Commons out, a lot will be riding on James Forrest, who has only recently returned to action following a virus.

Lennon said: “The virus took a lot out of him but when he plays and he’s fit and healthy, he’s a huge player for Celtic. It’s great to have him back.

“The timing is compounded by the loss of Kris but having James back is such a huge boost for everyone.”

Celtic are unbeaten in the Scottish Premiership this season, and host a side that have not won away from home this term, and who have failed in each of their last five Champions League group games on the road.

In addition, Frank de Boer’s young outfit have kept just one clean sheet in their last 12 matches, and must face an intimidating atmosphere at Celtic Park – only Barcelona have come away triumphant in the last 22 group stage matches there.