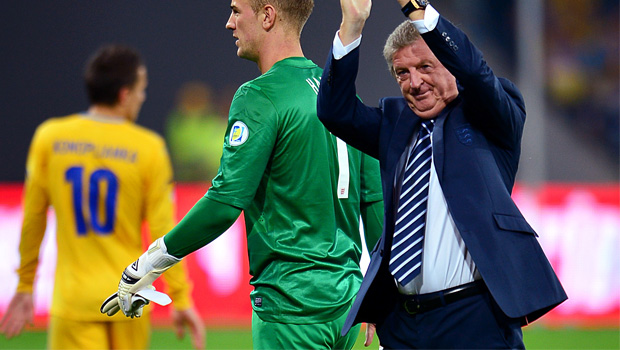 Roy Hodgson says England still have work to do but is delighted that World Cup qualification is in their own hands following a 0-0 draw in Ukraine.

England remain top of Group H, a point ahead of Ukraine and Montenegro, while Poland are three points behind in fourth.

It means the group is still very tight and Hodgson accepts there is no room for error going into their final two games which will see both Montenegro and Poland visit Wembley.

Two wins and England are heading to Brazil next summer, anything else and Hodgson’s men could have to settle for the play-offs or miss out altogether.

However, Hodgson was happy to leave Kiev with a share of the points and is equally satisfied that England’s fate remains in their own hands.

“We knew a victory would put us in a good position and a draw would maintain our leadership and make certain going into the last two matches at Wembley we have our fate in our hands.

“I am more than happy we go into these last two games at Wembley top of group and have one more point than rivals. That is positive as far as we are concerned.”

Meanwhile, midfielder Jack Wilshere, who was making just his 10th appearance for his country, says he is confident that England can see the job out in their final two games.

“We have got two home games now. We expect to win our home games and if we do then we will be on the plane to Brazil so that was a good point (on Tuesday night),” he said.