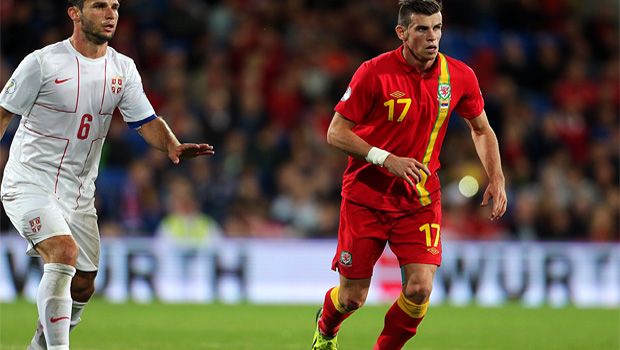 Wales boss Chris Coleman has warned Real Madrid that Gareth Bale is not yet ready to play 90 minutes of football.

The winger hardly trained throughout the summer while his future at Tottenham remained in doubt but there have been suggestions he could make his debut for Real against Villarreal on Saturday.

If Bale does start the La Liga clash then Coleman severely doubts he will finish it and is concerned his lack of match fitness could lead to the player picking up an injury.

The 24-year-old has been hampered by a groin problem but he did play for the last 32 minutes as Wales lost 3-0 to Serbia in their World Cup qualifier.

Bale came through unscathed and will now return to Spain to prepare for the Villarreal game.

“If he starts Saturday, he will not finish the game. I would be amazed if he does,” Coleman revealed.

“We have looked at him in these 10 days and he is nowhere near ready for 90 minutes even if Spanish football is slower.

“He may start, but he won’t finish the game.

“He may get 45 minutes, I don’t know, but he will feel better in himself after 30 minutes here.

“But he has only had four training sessions in two months which is dangerous.”

Meanwhile, it was not a good night for Wales as they slumped to the bottom of Group A following the defeat in Cardiff but Coleman, who has agreed a new two-year deal, believes he is still the man to take his nation forward.

“The contract has been agreed, although I have not signed it, but if I thought I could not affect this group of players I would not waste my country’s time,” he said.

“We can do something special, with a fresh run at it.”