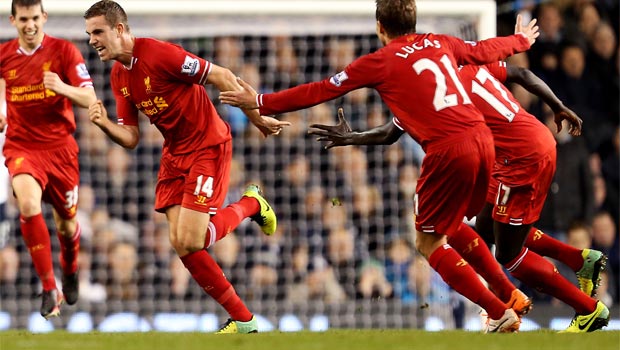 Jordan Henderson has admitted Liverpool need to improve defensively if they are to maintain their push for a top-four Premier League finish this season.

The Reds have conceded five goals in their last two games as they won 5-3 at Stoke before being held to a disappointing 2-2 home draw by Aston Villa on Saturday.

They have conceded sloppy goals in both matches and Henderson admitted they must put a stop to it if they are to finish the season back in the Champions League places.

The midfielder says it is the responsibility of the whole side, though, not just the back four and goalkeeper Simon Mignolet.

“It’s not just about the back four and the keeper, it’s the whole team. I’m sure that’s something we will work on,” Henderson told the Liverpool Echo.
“We’re disappointed. We set such high expectations here. We want to go into every game and win it.”

Despite the draw against Paul Lambert’s side, which was only the second time at Anfield this season that Brendan Rodgers’s side have failed to take all three points, Henderson says there were plenty of positives to take as they battled back from 2-0 down to claim a point.

He added: “The good thing is that from 2-0 down, we showed our character and our fight. We showed that we didn’t want to be beaten.

“Villa beat us 3-1 here last season, and we were beaten away to Stoke last season. If you look at it that way, it’s an improvement.”

Liverpool go to Bournemouth in the FA Cup fourth round on Saturday before the big Merseyside derby at home against top-four rivals Everton next Tuesday (Liverpool 1.74, Everton 3.94, draw 3.68).