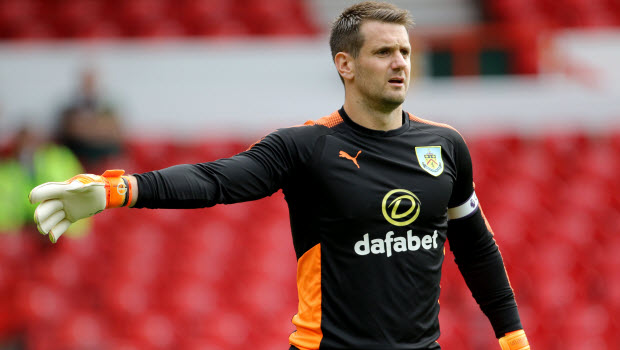 Goalkeeper Tom Heaton says he needs another impressive season for Burnley in order to earn a spot in Gareth Southgate’s England squad for the 2018 World Cup in Russia.

Heaton has been a stand-out player for Burnley ever since arriving from Championship outfit Bristol City in 2013 and he has made 73 Premier League appearances, keeping 20 clean sheets and saving three penalties.

The 31-year-old earned the first of his three England caps last year and he was also given the nod in goal for the Three Lions’ 3-2 defeat to Euro 2016 runners-up France in June.

Competition for the number one jersey is fierce with Southampton’s Fraser Forster, Everton’s Jordan Pickford, Stoke City’s Jack Butland and Manchester City’s Joe Hart, who is spending this season on loan at West Ham United, all vying for the position.

Heaton knows it will be difficult to earn the starting spot for his country but he is putting all his efforts into impressing for the Clarets in this campaign to earn a spot on the plane to Russia next year.

“The World Cup at the end of the season is always there, it doesn’t go away, but to have a chance of being involved in that you need performances week-in, week-out,” he said. “I don’t think there’s any given right to pull on that England shirt or be in the squad.

I don’t think any player should ever feel comfortable. “The competition is really strong, they’re all fantastic goalkeepers, and that will only breed more success and get more out of people.

I, for one, am looking forward to the challenge.” Burnley open their Premier League account away at defending champions Chelsea on Saturday and the hosts are 1.25 favourites to pick up the win, a draw is priced at 5.50 whilst the visitors are 11.00 outsiders.