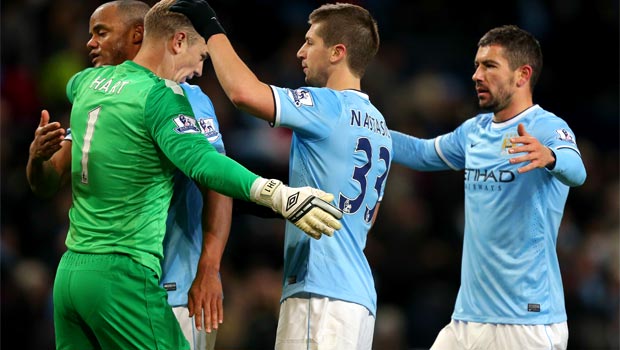 Manuel Pellegrini hailed Joe Hart as “the best goalkeeper in England” after his impressive display in Manchester City’s 2-1 Boxing Day win over Liverpool.

Hart was dropped by the City boss earlier in the season after several costly errors but he has been restored to the side for the past two Premier League games and looked back to his best against the Reds.

Pellegrini believes the England international has benefited from a spell out of the side and is delighted with his return to form.

“I am very pleased with Joe – not only now but I think in all the games he played in the last month he did very well,” the City boss said. “I thought it was good for Joe to have a rest. He was not in his best moment.

“He has worked very hard in the last month and a half. Now it was his normal performance. He is the best goalkeeper in England.”

City, who are now second in the table and just a point behind leaders Arsenal, face Crystal Palace on Saturday and Pellegrini is pleased with their consistent form, although he knows the title race will be keenly contested.

He added: “We will see what happens but this is just half of the Premier League (gone). We have all the second half and that will be very close – five or six teams (competing) for the title.”

However, the Chilean is not happy with the quick turnaround in fixtures during the traditionally busy festive period, with his side having to play a day earlier than title rivals Liverpool, Arsenal and Chelsea this weekend.

He added: “All the teams play exactly the same (number of) games, but I think we must have at least 72 hours from this game to another. All the other teams at the top of the table, apart from Manchester United, play 72 hours after.”