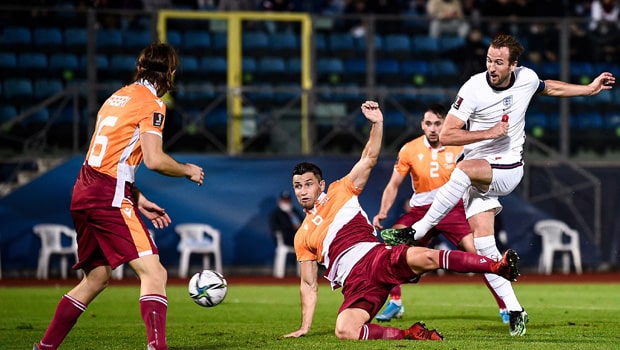 The Three Lions were already through the finals of the competition to be held in Qatar next year but still approached the game with a mixture of experience and youth.

The gulf in class was immediately evident as Harry Maguire gave England a 6th minute, before Fillippo Fabbri conceded a 13th minute own goal. The goal rush continued with Harry Kane’s goal blitz before half time.

His first came via a 27th minute penalty, he then added another five minutes later before adding another penalty in the 39th minute and one more before half time. The goals draw him level with Gary Lineker’s 48 goals for England.

Emile Smith-Rowe had his first English national team goal just before the hour mark, while Tyronne Mings, Tammy Abraham and Bukayo Saka all completed the rout against a team that finished with ten men.

In other matches, Italy is on the verge of missing a second consecutive FIFA World Cup after failing to qualify automatically. The Italians who failed to qualify for the 2018 World Cup in Russia needed to better Switzerland’s result on the night but found Northern Ireland a hard nut to crack as the game ended goalless.

However, Switzerland took full advantage by beating Bulgaria 4-0 on the night to qualify automatically for the World Cup.

Che Adams was on target as Scotland beat Denmark 2-0 to deny them an opportunity of ending the qualifiers with a 100% record.

Meanwhile on Tuesday, Netherlands will face Norway with a hope to secure automatic qualification while Turkey will play Montenegro, France will face Finland and Belgium will play Wales.