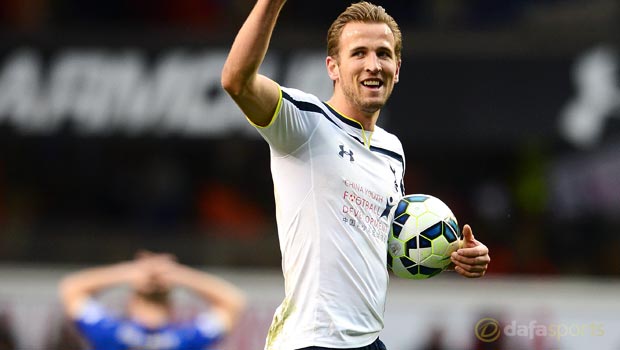 Harry Kane has moved to kill speculation he could join Manchester United in the summer by insisting he wants to stay at Tottenham “for a very long time”.

Reports had suggested the young England forward was being lined up by manager Louis van Gaal at Old Trafford as part of his ongoing project to return the former champions to the summit of domestic football.

The 21-year-old has enjoyed an eye-catching campaign, scoring 20 goals in the Premier League and 30 in all competitions, but says he has no immediate plans to leave White Hart Lane.

His said his short-term goal is to help manager Mauricio Pochettino win some silverware and keep improving his own game.

“Spurs is where I’m at and where I plan to be for a very long time,” he told BT Sport.

“We’ll be looking to win some good trophies in the future. I want to keep progressing and keep getting better.”

Kane’s blistering form in front of goal earned him a maiden England call-up in March and he marked his senior debut by scoring within 60 seconds of coming off the bench against Lithuania at Wembley.

However, he has only scored one goal in his last seven games in the top flight for the north London club and admitted he needs to show some consistency season after season.

Kane added: “This season has been crazy and more than what I ever expected to do so early on but it’s happened, and it’s how you deal with it.

“I am hoping to go on and win many trophies for Spurs and England. That’s always been the aim since I was a kid, dreaming of lifting the trophy one day for them.

“I want to be the player that does everything he can to reach his ability and I’ll keep working hard. I want to win trophies.”

Tottenham end the season away to Everton on Sunday and are currently priced 2.88 in the match betting.

Roberto Martinez’s men are quoted 2.30 and the draw outcome is available to back at 3.50.