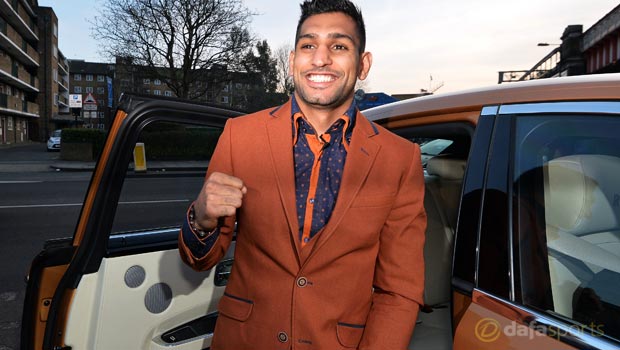 Amir Khan has earned the right to be unbeaten superstar Floyd Mayweather’s last opponent in September, according to Ricky Hatton.

American ring icon ‘Money’ took his professional record to 48-0 when he won a unanimous points decision against Manny Pacquiao at MGM Grand Garden Arena in Las Vegas at the start of May.

The 38-year-old said the last of his six-fight arrangement with Showtime will be later in 2015 and ruled out a rematch with the Filipino.

Khan (30-3, 19 KOs) has made no secret of his desire to be named Mayweather’s last opponent before he retires and this weekend will hope to move a step closer when he taken on former light-welterweight world champion Chris Algieri (20-1, 8 KOs) at Barclays Center in Brooklyn, New York City.

Manchester hero and former world champion Hatton, who lost to Mayweather in 2007, says the Bolton fighter has the skill set to trouble the Grand Rapids superstar and is hoping he gets his chance.

He said: “If anyone deserves that kind of pay day it’s Amir Khan. He’s taken a lot of criticism over the years, mainly because of his chin. But he’s been beaten a couple of times, come back and is now performing better than ever. He’s also hardly ever in a bad fight, so hats off to him.”

Hatton added in an interview with BBC Sport: “If anyone’s going to beat Mayweather, it’s Amir. People look at me like I’m an idiot when I say that. But styles make fights and Amir boxing the way he is at the moment is the last thing Floyd needs at this stage of his career.”

Khan lost consecutive fights against Lamont Peterson and Danny Garcia in late 2011 and the summer of 2012 respectively, but has since secured wins against Carlos Molina, Julio Diaz, Luis Collazo and Devon Alexander.

Khan is currently priced 1.08 in the fight prices betting and Chris Algieri is available to back at 8.00. The draw outcome is quoted 23.00.