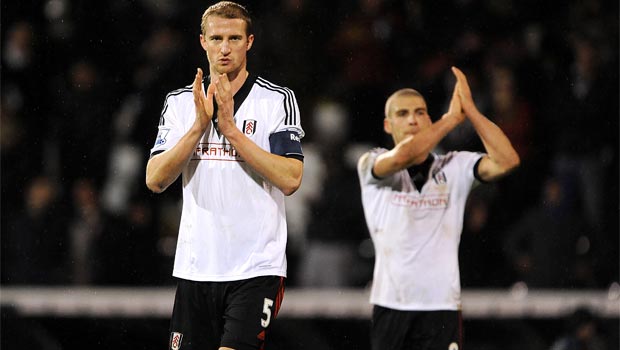 Fulham manager Rene Meulensteen hopes Brede Hangeland’s return to fitness plugs Fulham’s leaky defence and gets his side back on track in Tuesday’s FA Cup third-round replay against Norwich City.

The big Norwegian defender hasn’t featured since October because of a sciatic nerve problem, but the Fulham captain is due to make his comeback against the Canaries at Craven Cottage.

Meulensteen has not been able to select the 32-year-old Hangeland since he took charge of the club on December 1, but is looking forward to the defensive rock’s return.

“It’s a massive boost to have him back because he’s been here for so long and knows the club inside out,” said the Fulham manager.

“He knows how important it is to get things back on track and has been very frustrated with the injury. He’s knocking on the door and is raring to go.

“He’s an experienced central defender who’s calm on the ball and capable of playing out of the back and feeding the ball to the midfield. He’s an attacking threat in the opposition box with set plays and corners as well.”

The struggling Cottagers have conceded 46 goals in just 21 Premier League games – the most in the Premier League – to leave them hovering just above the drop zone.

And it is their vulnerability from set-pieces that was again exploited by Sunderland on Saturday as Adam Johnson scored and set-up first-half goals from set-pieces before dispatching a second-half penalty in a 4-1 romp for the Black Cats.

Fulham are the favourites to progress against Norwich, who have lost three and drawn four of their last seven matches, and can be backed at 1.780 in the -0,-0.5 Handicap.

Montenegro full-back Elsad Zverotic featured in the first game at Carrow Road 10 days ago, which finished 1-1, and hopes home advantage can tip the tie in Fulham’s favour.

“At home, in front of our fans at Craven Cottage, we have a very good chance,” he said, in the official match programme for Tuesday’s game.

The winners of the replay will face League One giant-killers Sheffield United, who ousted Aston Villa, later this month.