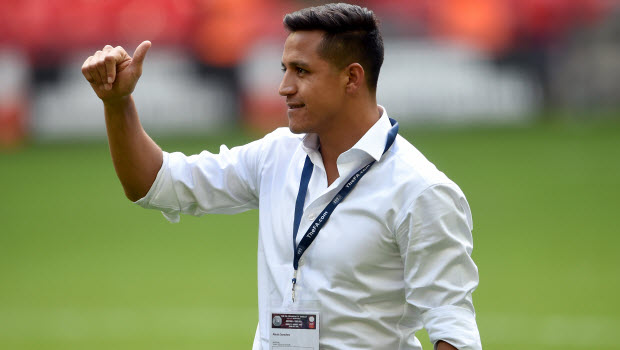 Arsenal boss Arsene Wenger has confirmed forward Alexis Sanchez will miss at least the next two matches due to an abdominal strain.

The Chile international only recently returned to first-team training after being granted an extended summer break following his exploits in the Confederations Cup.

However, the 28-year-old suffered an abdominal strain in training last week and Wenger has now confirmed that he faces a spell on the sidelines, meaning he will miss the Gunners Premier League opener against Leicester at the Emirates Stadium on Friday, as well as their first away match of the campaign at Stoke the following week.

“Sanchez will not be available,” Wenger said. “He had a little abdominal strain that he caught in training on Sunday morning before he came to Wembley.

“He had a scan two days ago and he’s out for a while. I don’t know [how long he will be out] – two weeks, one more week.

He will not be available. He will not play at Stoke.” Sanchez has been heavily linked with a move away from the Emirates Stadium this summer, with Manchester City and Paris Saint-Germain both reportedly being interested, but Wenger insists he has held no discussions with the latter and he is confident the forward will remain with the Gunners.

“It’s a long time since I spoke with (PSG president) Nasser (Al-Khelaifi) because he was certainly very busy to complete the transfer of Neymar,” Wenger added.

“I think, if you read the French papers, [Kylian] Mbappe is how they will look to finish their transfer market.”

Arsenal finished fifth in the Premier League last season, but they are priced at 1.91 to secure a top four finish this time around.