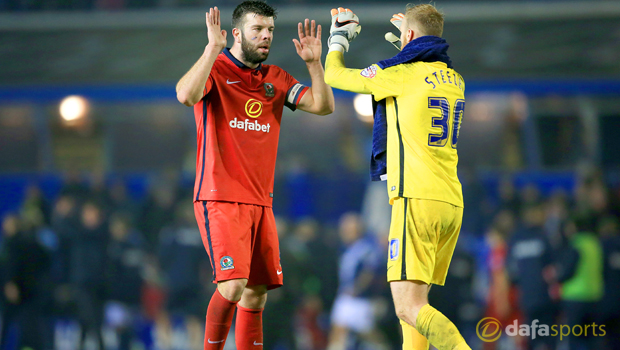 Centre-back Grant Hanley says a stable and settled back-four is one of the main reasons results have started to improve for Blackburn Rovers in recent weeks.

The former Premier League outfit have been inconsistent this season and, with just three wins from 15 attempts, the club are languishing down in 15th place in the Championship.

Injuries have played a part and the absence of Scotland international Jordan Rhodes, who scored 21 goals in the previous campaign, has been highlighted with the lack of attacking threat in some matches.

However, there has been some good work at the back for Rovers as of late and a 2-0 victory over Leeds United was followed by a 0-0 draw against high-flying Birmingham City last time out.

It was the sixth clean sheet in the league and that is only four fewer than the team managed in the whole of last season after constant reshuffling in the starting 11 hindered performances.

A clean bill of health means there is competition for places at the back and Hanley, who knows Matt Kilgallon, Tommy Spurr, Adam Henley and Darragh Lenihan are all waiting in the wings, believes the stability in defensive has helped massively.

“We have worked very hard but what I think has helped as well is that we’ve been more settled,” he said. “Last year there were a lot of injuries. People were coming in and going out, and playing in different positions.

Blackburn, who are priced at 11.00 to be relegated, welcome Brentford to Ewood Park on Saturday as they look to extend their unbeaten run to three games.