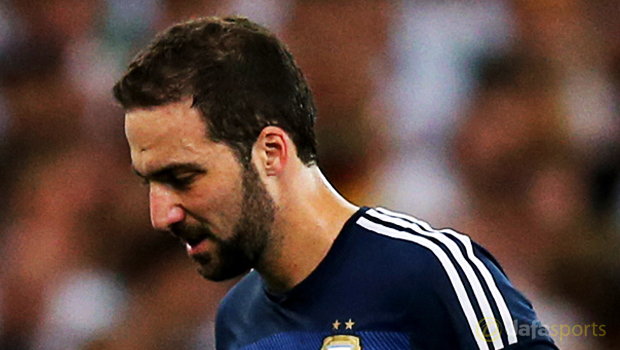 Gonzalo Higuain hopes to help Juventus secure the Champions League crown after becoming the third most expensive player in history.

The Argentina international completed his move to Juve from Serie A rivals Napoli on Tuesday after the Bianconeri agreed to meet his 90million euros [£75m] release clause, in a deal eclipsed only by Gareth Bale and Cristiano Ronaldo’s moves to Real Madrid.

The transfer does break a domestic record as it dwarfs the previous highest fee of £50m, which Chelsea paid to snare Fernando Torres from Liverpool in 2011.

The 28-year-old has agreed a five-year deal in Turin and Higuain says the chance to challenge for the Champions League title with Juve was one of the key factors in his decision to leave Napoli.

“I feel wonderful sensations, I’m happy to get here,” he said in an interview with J-Medical, as reported by Tuttomercatoweb. “I hope to have a great year.

He added: “The Champions League? Hopefully, it is now important to work.” Higuian also revealed he hopes to forge a formidable partnership with Paulo Dybala in the Juve attack.

It remains to be seen as to whether or not the striker will get the chance to play alongside midfield talisman Paul Pogba however.

Publicly, Juve has stressed they intend to retain the Frenchman but the fee paid to snare Higuain has led to increased speculation the Italian champions are resigned to losing Pogba this summer.

Both Manchester United and Real Madrid have been linked with Pogba and the two European heavyweights are said to be prepared to pay over 100m euros for the France international.