Arsenal: Giroud fires Gunners back to the top 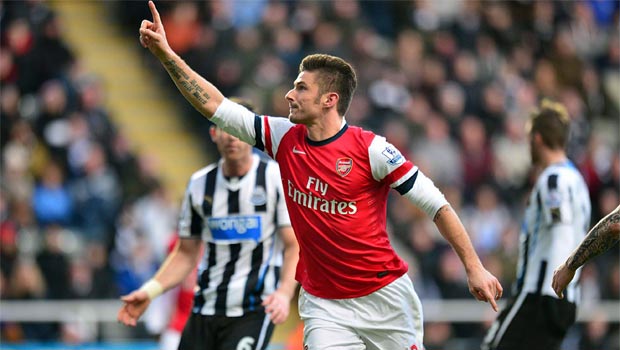 Arsenal returned to the Premier League summit with a hard-fought 1-0 win over in-form Newcastle thanks to Olivier Giroud’s 11th goal of the season.

The French striker, who had gone more than a month without finding the net, rose to glance home Theo Walcott’s 65th-minute free-kick to settle the contest and inflict only the Magpies’ second defeat in 10 league games.

The Gunners have now gone a point clear of Manchester City heading into the New Year, with Chelsea a further point behind after they came from behind to beat Liverpool 2-1 at Stamford Bridge on Sunday.

Martin Skrtel tapped home from close range after the Blues had failed to clear Philippe Coutinho’s free-kick in the third minute, before Eden Hazard – who was given the man-of-the-match award – curled an unstoppable shot into the top corner to level matters after 17 minutes.

Samuel Eto’o, who could have picked up a red card and conceded a penalty on another day, scored what turned out to be the winner in the 34th-minute when he turned home Oscar’s cross, although Liverpool goalkeeper Simon Mignolet perhaps should have done better.

A second defeat in as many matches has seen Brendan Rodgers’ men, who were top at Christmas, slip to fifth in the table, with Everton replacing them in the top four after a 2-1 win over Southampton.

Seamus Coleman’s fine individual goal was the only bright spark of a disappointing first period, before the Saints threatened an upset after 71 minutes when substitute Gaston Ramirez rifled a 25-yarder past Joel Robles, who was given a start in goal due to Tim Howard’s suspension.

Parity did not last long though, three minutes in fact, as Romelu Lukaku swept home the winner after a fine move involving Steven Pienaar and James McCarthy.

Roberto Martinez seems to have worked wonders at Goodison Park, with Champions League football now a distinct possibility, although there is still a long way to go and there are one or two other clubs finding some form.

Speaking of which, Tottenham have now gone three Premier League matches unbeaten since the 5-0 horror show against Liverpool, with a comfortable 3-0 win over Stoke at White Hart Lane on Sunday.

Spurs boss Tim Sherwood will hope that the win serves as a confidence booster ahead of a trip to Manchester United on New Year’s Day, with the two sides separated only by goal difference in sixth and seventh in the table and United having won their last four games to have momentum of their own.