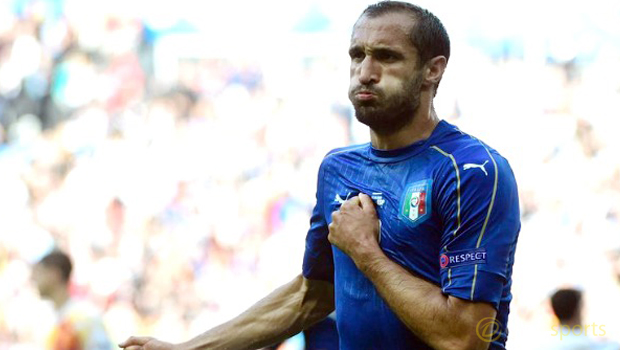 Giorgio Chiellini believes there is more to come from Italy following their 2-0 Euro 2016 last-16 victory over Spain on Monday.

The Azzurri, who are 7.00 to win the tournament outright, gained revenge for their 4-0 crushing at the hands of La Roja in the European Championship final four years ago with another masterful performance of pressing the ball and taking their chances.

Having disposed of the champions, next up for Antonio Conte’s men are Germany on Saturday in the quarter-finals, a country they have never lost to at a major tournament.

It is sure to be a clash of styles, with the dogged Italians likely to look to frustrate the star-studded world champions in Bordeaux.

Chiellini and his fellow Juventus defenders Leonardo Bonucci and Andrea Barzagli, plus goalkeeper Gianluigi Buffon, are sure to be key to their chances, having not yet conceded when fielded together in France.

Conte’s side’s defensive play has been complimented with strong work on the counter-attack and they now look to have real momentum behind them, having previously been written off in the build-up to the tournament.

Chiellini, who netted Italy’s opener in Monday’s win, admits his side were delighted with the manner of their performance against Spain and believes they are only going to get better.

The defender told Rai Sport: “We had a few things to prove and take revenge for. We deserved it and frankly made it too anxious in the final 15 minutes, as we should’ve finished it off a lot earlier. We wanted it more.

“This is the beginning. We’ll enjoy it for the next few hours, but we’ll take it one game at a time. The good stuff starts now.” Italy are 3.80 to win on Saturday, with the Germans priced at 2.20 and the draw is 3.00.