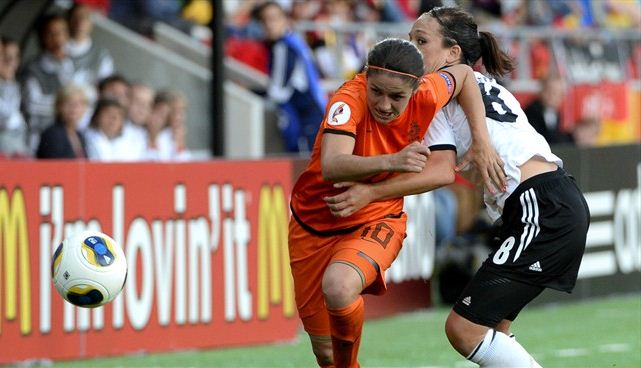 Defending women’s Euro champions Germany were held to a 0-0 draw by the Netherlands in their opening Group B game.

The five-time defending champions began the tournament in Sweden as hot favourites to lift the trophy again, but were frustrated in their bid to get off the mark by a resilient performance from the Dutch, for whom Lieke Martens nearly scored with a spectacular 30-yard effort that produced a great save from keeper Nadine Angerer.

As was to be expected, the Germans dominated possession, but found the Dutch rearguard to hard to breach, the outcome bringing to an end a run of 19 consecutive victories in the competition.

In the other Group B game, there was jubilation for Iceland who scored a late penalty to gain a 1-1 draw with Norway, their first point in the tournament. That keeps them very much in the competition, as three teams can go through to the knockout stages, and a good result against Holland could well realise that dream.

Everything is still very much up for grabs after the first two days, with all four matches ending up all square.

England begin their campaign on Friday night with a group C encounter against Spain, ahead of which, coach Hope Powell was optimistic of reaching the final again, having lost out to Germany in 2009.

She said: “Spain are a very technical team, very similar to the men in fact, so they will be a big threat and we will have to be at our best.

“In 2010 their under-17s won the European Championship and a lot of those players are coming through. It’s their first major tournament since 1997 so for them this is a massive leap.

“They have got a lot to prove and they are capable of it. They are here for a reason, it was difficult to qualify for this tournament.”