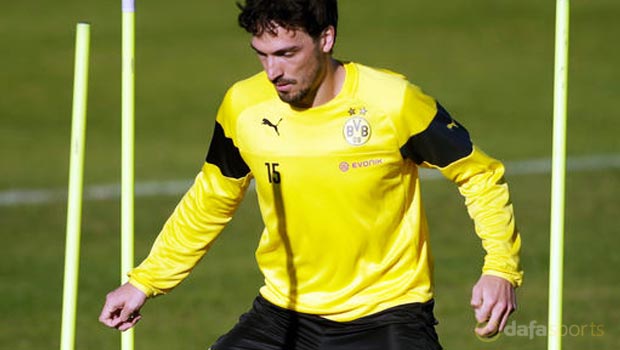 Germany defender Mats Hummels will turn down the chance to join Manchester United in the summer to stay at Borussia Dortmund, according to sporting director Michael Zorke.

Reports had suggested the 26-year-old had been earmarked by Old Trafford manager Louis van Gaal as a top target in the summer.

The move appeared to gather pace last month when it was announced coach Jurgen Klopp will leave the Bundesliga giants at the end of the season for a new challenge.

Two-time Bundesliga title winner Hummels has emerged as one of the most sought-after central defenders in continental Europe but will rebuff advances made by the Premier League giants.

Speaking to Kicker, Zorke said: “It made sense that Mats was thinking about his future, but I always pointed out that we plan [for the future] with him.”

Signal-Iduna-Park officials have held talks with Hummels and the player’s advisor and father, Hermann, and Zorc added that there was now a “clear consensus” between the club and the World Cup-winning defender.

The former Netherlands coach has already signed striker Memphis Depay from PSV Eindhoven but is expected to ramp up his efforts to find long-term replacements for former mainstays Rio Ferdinand and Nemanja Vidic in the summer.

It follows an admission from executive vice-chairman Ed Woodward that the former champions will have a squad deep enough “to challenge on all fronts… all competitions next year”.

Borussia Dortmund end a disappointing Bundesliga campaign on Saturday when they host Werder Bremen and BVB are currently priced 1.25 in the match betting.

The draw outcome is quoted 5.50 and Werder Bremen are available to back at 9.00.