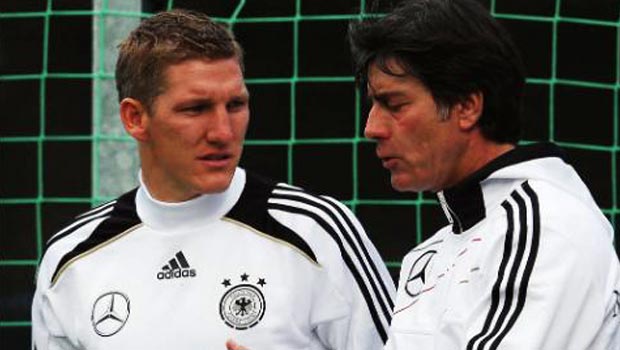 Germany boss Joachim Low admits there is some concern over veteran midfielder Bastian Schweinsteiger?s fitness ahead of the World Cup as he recovers from yet another injury.

Schweinsteiger was forced off early on in Bayern’s final Bundesliga game of the campaign against Stuttgart and had to sit out the DFB-Pokal cup final victory over Borussia Dortmund.

The 29-year-old will celebrate a decade in the Germany set-up just before their opening Group G game, having claimed his 101st cap in the 1-0 win over Chile in March.

However, it has not been a great term for the midfielder in terms of injuries and Low insists it is not certain that he will be ready for the national side’s opening game against Portugal on June 16.

The one-club man was forced to undergo back-to-back ankle surgeries in pre-season, then he suffered an inflamed knee ligament during a training camp in Qatar in January.

Low is hoping to have the experienced midfielder available for the group stages and admitted that his influence is crucial to their style.

Low said: “With his class and experience, he has a big influence on our game.

“When he is able to play 90 minutes, with his confidence on the ball and tactical awareness, he is very valuable for us.

“Other players respond when they see Bastian is playing well.

“But you can see that he was injured for a long time.”

Germany, who are priced at 1.48 to win Group G could be short on defensive midfield options if the Bayern man is not passed fit with Sami Khedira just returning from six months out and Sven Bender ruled out with a thigh injury.