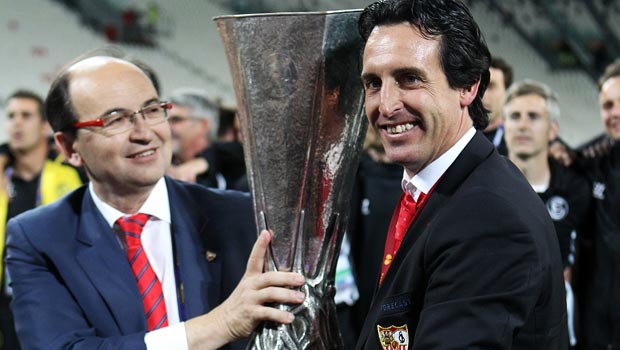 Sevilla president Jose Castro believes boss Unai Emery will sign a contract extension with the Spanish side and end all the speculation linking him with a move to AC Milan.

Emery returned to Spain to take over from Michel at Sevilla in January 2013, following a short and turbulent spell in charge of Spartak Moscow.

The 42-year-old came under a lot of pressure during his first 12 months at the Ramon Sanchez Pizjaun as he was tasked with the job of getting the Seville-based outfit back into Europe.

Despite failing to secure a top-six finish in his first term at the helm, the La Liga side were handed a place in the Europa League duo to the financial problems of Malaga and Rayo Vallecano.

The Spaniard had his hands tied as he was forced to sell key players in order to gets some funds in for the club and with Alvaro Negredo, Jesus Navas and Gary Medel all departing he was left with a rebuilding job.

However, the tactician spent wisely and although Sevilla started the
2013-14 campaign slowly they really got going after the winter break, securing a fifth placed finish as well as claiming the Europa League with a penalty shoot-out win over Benfica.

Castro admits that the performance of Emery is without a doubt going to attract unwanted attention from other clubs but he expects that the offer a new deal will see the former Valencia boss stay put.

Castro said: “In recent days there has been talk that there are teams interested in our coach. Obviously nobody is bitter (about this); you try to have a good season and he made this happen, but I said a few weeks ago I talked him about this.

“I am calm and he is also. When we return to Seville (from the LFP World Challenge in Indonesia) he will sign his contract as we had anticipated.

“I have no reason to think anything else because he is at ease in the Seville, as he has always said to me, and it is normal that coaches to aspire for more.”