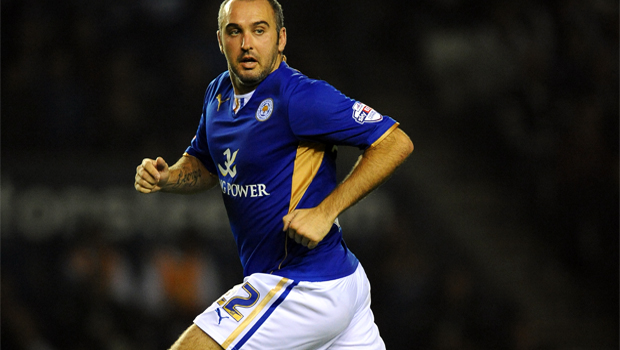 New signing Gary Taylor-Fletcher can’t wait to pull on the blue shirt again after getting his first taste of Leicester City action in a 2-2 draw against his former side Blackpool.

The 32-year-old came on as a second half substitute and played a part in City’s first goal as Danny Drinkwater was upended in the area after picking up his pass – allowing Paul Konchesky to convert from the spot.

And with a Capital One Cup clash against Derby County at King Power Stadium next up on Tuesday night, Taylor-Fletcher is eager to get as many minutes under his belt as possible to help him get back his match sharpness.

“For me it’s just nice to be on the pitch again,” Taylor-Fletcher told Foxes Player after the game. “It’s been good getting to know the lads and finding out a bit about what their banter is like in the hotel with their tricks.

“It’s a good bunch of lads here and I couldn’t feel any more at home.

“I’m someone who can link up the play, and play just in behind or out wide. I’m someone who will get on the ball in the holes and try to create things. As I say, they’re a good bunch of lads and I think I’ll blend in well.

“It’d be nice to get a first start [on Tuesday] and get some more minutes under my belt. That’s what I need at the minute; probably two or three games and then I’ll be up to where I want to be.”

Taylor-Fletcher, a promotion winner in 2009/10 with the Seasiders, joined City on a one-year deal following a six-year spell with Saturday’s opponents and has been impressed with what he has seen from his new side so far.

He added: “I watched Tuesday night and the pressing and the way the lads played was magnificent and [on Saturday] we just couldn’t get it [in the first half].

“Blackpool’s game plan and the way they played was to try and stifle us and impose their game on us. We were unlucky but we showed great character in the second half to pick ourselves up and get in the lead.

“Any other team and I probably would have fancied the penalty. But my legs were already a bit like jelly before coming on and I’ve not played many games.

“It was a great goal [from Andy King] that put us ahead, but as the gaffer has just said, we’ve got to be able to see those games out.

“It shows the character of the lads that they were all gutted after the game not to be picking up the three points. It was a good point away from home though and we’ll see what happens now.”