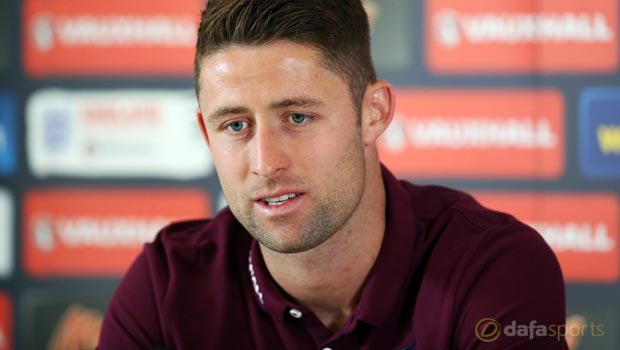 Gary Cahill says it would be “great” if England can defeat Slovenia on Sunday in their Euro 2016 qualifier to end the international year unbeaten.

The Three Lions boast an unblemished record in their qualifying campaign so far, having picked up a maximum 15 points from their first five matches.

Roy Hodgson’s men started off in great fashion by defeating arguably their hardest opponents in Group E, Switzerland, 2-0 away from home thanks to a double from Arsenal forward Danny Welbeck.

A 5-0 success over San Marino followed before a goal from captain Wayne Rooney earned a hard-fought 1-0 victory away at Estonia.

England then defeated Sunday’s opponents on home soil 3-1 after coming from a goal down before thumping Lithuania 4-0 in their latest qualifying match.

The performances have gone a long way to banishing the dismal memories of the 2014 World Cup, in which the nation exited at the group stage, and vice-skipper Cahill is confident the team can end this year unbeaten.

“It would be great if we could get a result on Sunday and go the whole season, the whole year, unbeaten,” he said.

“That’s obviously what we are aiming to do, there have been massive steps – not just the results but the performances as well. I think you have seen a freshness from the World Cup onwards.

“We need to win the game on Sunday and go in on the same vein that we have been doing in the group. Again it’s a great achievement but it’s going to be tough, it’s one of the better teams in the group and we want to get the job done.

“We know if we win this game potentially the following game that comes up then we could qualify. We need no motivation going into this.”

England are firm favourites to defeat Slovenia in their own backyard and extend their advantage at the top of the group, with the Three Lions 1.85 to win while the hosts are a 4.75 shot.