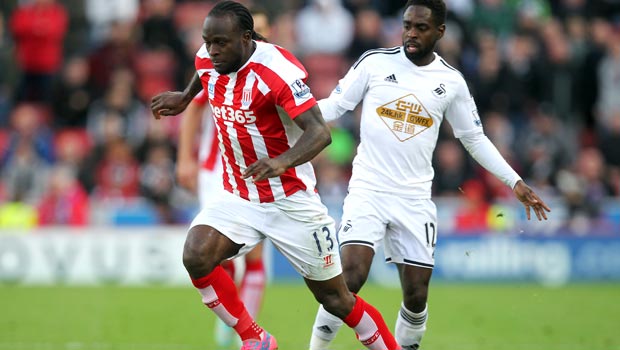 Swansea manager Garry Monk has branded Stoke’s Victor Moses as a “cheat” following the Potters 2-1 victory over his side.

The Swans went down to a defeat at the Britannia Stadium after Jon Walters headed the Potters to three points, after a contentious Charlie Adam penalty had brought the home team level following Wilfried Bony’s opening spot-kick for the visitors.

Ivorian Bony had given the visitors the lead from the spot after referee Michael Oliver penalised Stoke skipper Ryan Shawcross for manhandling him at a corner, however the lead didn’t last long as Angel Rangel was adjudged to have fouled Moses in the Swansea penalty area, despite there being minimal contact.

Video replays of the incident suggest that Monk has every right to complain about the decision.

The Swans boss said: “Moses should be done for diving, for cheating.

“It was an absolute disgusting decision from the referee in terms of the penalty against us.

“He is supposed to be a professional referee at the highest level. He’s the only guy who thought it was a penalty. Everyone in the stadium was amazed.

“How he can’t see it is a blatant dive is beyond me.”

“I actually heard him say that my player was a cheat which is unacceptable in my view,” said the 50-year-old.

“He’s obviously upset. We have to come in here 20 minutes after the game to speak about what’s gone on and sometimes you just have to bite your tongue and maybe that will come from experience.”

The three points for the Potters moves them up to 10th in the Premier League, but Swansea are now without a win in five league games.