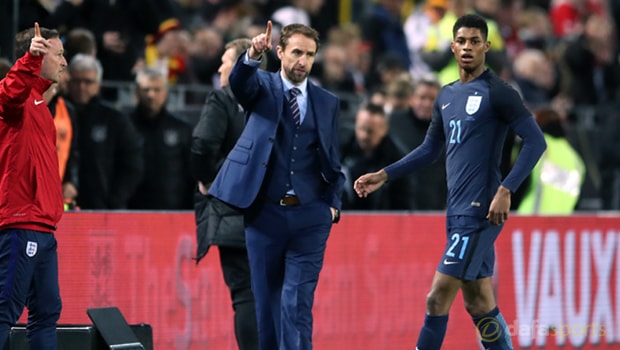 Gareth Southgate has praised the adaptability of his England side following Wednesday’s 1-0 defeat to Germany.

The new boss prompted somewhat of a surprise by opting for a three-man defence, with Burnley’s Michael Keane making his debut on the right side, while West Brom’s Jake Livermore also got the nod in midfield.

However, rather than panic, the Three Lions looked assured in their unfamiliar shape and had the chances to win the game.

Lukas Podolski’s thundering strike on 69 minutes eventually made the difference, as the 31-year-old brought the curtain down on his 130-cap Die Mannschaft career with a bang.

Both countries will now look towards Sunday’s qualifiers, with Germany travelling to Azerbaijan in Group C, while England host Lithuania in Group F.

Speaking afterwards, Southgate admitted there were plenty of positives to take despite the defeat and believes his side will learn from their experience in Dortmund.

“I am not somebody that is over-positive if you have been defeated, but I have to be really pleased with the way the players have played individually and in terms of the tactical system and the way that worked,” Southgate said.

“Their ability to adapt quickly to that I thought was excellent. “That was a good learning experience for them, but I am very pleased with what we learned, the manner of the performance.

“And the one bit we missed was the finish. We should have had the game won, really, but I am very pleased with what we did.”