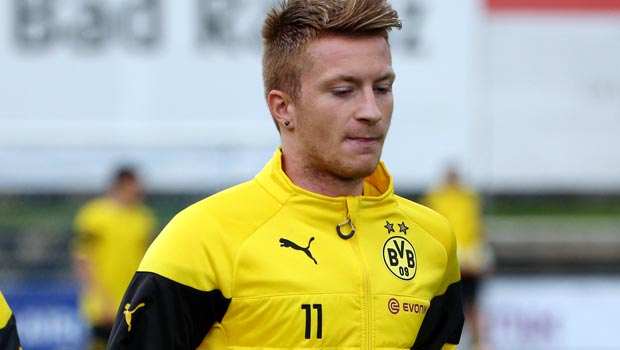 Borussia Dortmund boss Jurgen Klopp is keeping his fingers crossed that Marco Reus will decide to stay with the club beyond this season.

Germany international Reus is one of the most sought-after players in Europe at the moment, with a large number of clubs linked with making a summer bid for him.

The 25-year-old’s current contract has a 25million euros release clause in it and BVB fear they could be about to lose another of their star players.

Recently, Mario Gotze and Robert Lewandowski have been persuaded to leave Dortmund and move to Bayern Munich, and the Bavarians are ready to swoop again for Reus.

While the German champions would face plenty of competition for the forward’s signature, Klopp is hopeful it will not come down to a fight over Reus’s services as he will decide to stay at Signal Iduna Park.

“The boys are 100 per cent here and I have a positive feeling that the player we are talking about (Reus) will stay a bit longer,” the Dortmund boss told Die Welt.

Reus is currently out of the side with an ankle injury and Dortmund are eager for his return given their perilous position towards the bottom of the Bundesliga.

Dortmund have won just four games all season and are inside the relegation zone ahead of the return of the Bundesliga from its winter break this weekend.

Klopp remains confident Dortmund will not be relegated and is eager to produce a strong showing in the second half of the season.

“We are not naively optimistic and know that the pressure situations won’t be any less. But when we look at our situation, we know we can control it,” said Klopp.

Dortmund are back in action on Saturday against Bayer Leverkusen and are 2.96 to pick up a much-needed win. The home side are 2.38, while the draw is 3.20.